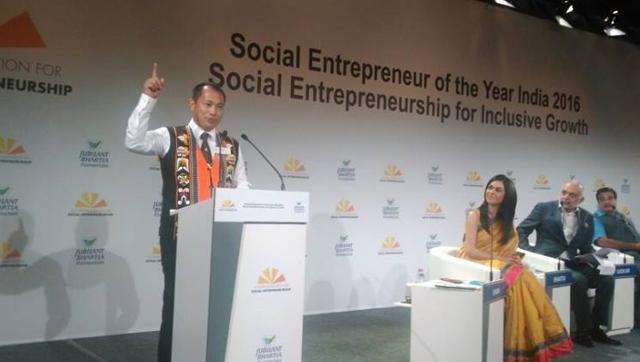 Meet a former college lecturer who helped in creating over 15,000 jobs across the north-east. He training youths to become entrepreneurs and he has been awarded from the Schwab Foundation for Social Entrepreneurship.

A former lecturer in Economics at Baptist College in Nagaland, Neichute Doulo won the ‘Social Entrepreneur of the Year Award 2016’ from the Schwab Foundation. Schwab Foundation works closely with the World Economic Forum, in partnership with Jubilant Bhartia Foundation.

After 1992, this venture was his second attempt. He had earlier formed ‘Beacon of Hope’ for motivating youths to take up jobs that may even look small. He joined a regular job of teaching as the process did not sustain.

Doulo told PTI, “When we started, 13 of us at EA donated Rs 500 and one day’s wage as an initial corpus. So, we started our journey with an initial capital of Rs 7,500. We began by making greeting cards and selling leather belts and bags, which helped us raise a few lakh rupees”.

Furthermore, EA went to people for donations as an investment in the organisation. Now, EA gives financing at 16 percent interest to youths for starting their own small businesses. Over 10,000 people have availed loans from it.

The organization received RBI approval as a lending institution. Around three years back, EA expanded its services to neighboring Manipur. They have been instrumental in channelizing over Rs 150 crore of loans. Furthermore, it has 100 percent recovery of banks.

Duolo said, “It was a big challenge initially to motivate people. We have been able to create 15,000 jobs, either directly or indirectly, in Nagaland and Manipur”.

With direct support from EA, more than 2,700 enterprises are currently running successfully. Also with direct assistance from EA, over 3,500 farmers are on sustainable livelihood. Doulo also said his organization has been invited for imparting training and launching other activities in Arunachal Pradesh and Assam by respective local governments.