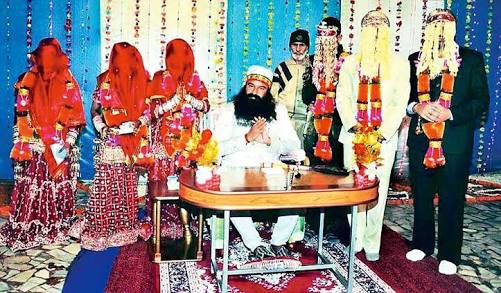 Every girl dreams of having a grand wedding, settling into a family, and living a respectable life. However, there are also numerous girls whose hopes are shattered before getting fulfilled. Weddings remain only distant dreams for them. These are the sex workers living in the dark and infamous alleys of cities across India. Some of them have been dragged there due to circumstances, and some others due to helplessness. There are many of these girls who were forced into this trade against their will and could not get out.

Dera Sacha Sauda, the multi-religious organisation known for its social service activities, and the Revered Saint Dr. Gurmeet Ram Rahim Singh Insan recognised this pain and, adopting these girls, gave them the title of Shubh Devi. Not only that, but the Revered Saint also ensured the fulfilment of their dream, the one that they had given up hopes of ever seeing realised. Answering his call, hundreds of young men volunteered to marry the Shubhdevis. The Revered Saint acknowledged their service by giving them the title of Bhakt Yodhas.

On 9th November, 2009, the Revered Saint began the momentous initiative at the Shah Satnam Ji Ashram, Barnava (Uttar Pradesh) and Lakhs of hands went up in support. More than 1500 young men agreed to marry girls who had left the life of prostitution and wished to get assimilated in the mainstream of society. At the same time, there were also lakhs of individuals who wished to get them married off like they would marry off their own sisters.

With the inspiration and blessings of the Revered Saint, about 19 young men have married former sex workers. Not only that, a lot of them have also accepted the girl’s previous children as their own. One initiative on the part of the Revered Saint changed their lives forever. They are now living happily with their families.

One of the girls who had responded to the Revered Saint’s call of assimilating with the mainstream narrated her story. She had gotten caught in the web of trafficking at a very young age. Families and relationships seemed like matters of a different world to her. She had grown to accept this life as her fate. Once, a few people met her and referred to her as a sister. She was shocked. They told her about the Revered Saint and showed her the way of escaping the web of trafficking. She took a leap of faith and trusted those people. When she reached Dera Sacha Sauda, she found a father in the form of the Revered Saint, and a family atmosphere all around her. Then, on 25th January, she was married into the family of a good-looking and able man. She has a changed life now.

Volunteers of the organisation have started rallying in the infamous lanes of cities around the nation. They are creating awareness among sex workers and informing them about the way in which they can get out of this quicksand. With every passing day, the Dera Sacha Sauda is influencing and changing the lives of girls and giving them a new attempt at finding happiness.