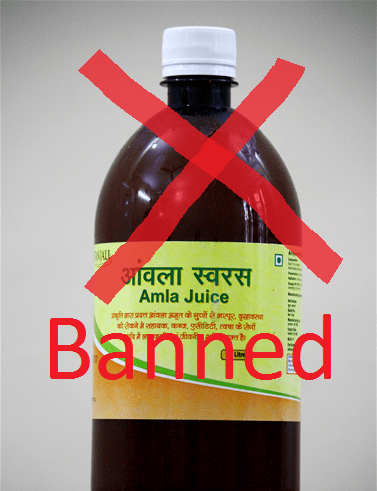 In a major setback to Haridwar-based Patanjali Ayurveda, the Uttarakhand government found that two of the company’s products are of substandard quality and do not meet purity norms. This was revealed in response to a Right to Information (RTI) request that was filed in this regards.

The reply from the Uttarakhand government says that 2 Patanjali products, namely, Patanjali’s Divya Amla Juice and Shivlingi Beej have failed to meet the required quality standards. It said that after testing, it was found that the pH level in these two products did not meet the required standards.

This is a matter of concern as the pH balance reveals the level of acidity in any products. Too much of acid content has the potential to lead to several health problems.

The reply from the government also said that about 31.68% of outside matter was found in the Patanjali product of Shivlingi Beej. This is an indicator for detecting whether there is adulteration in any given product that claims to be pure.

Along with Patanjali, about 82 samples of Ayurvedic products from different companies were tested by the government. It was found that over 40% of these samples failed to meet the government’s standards on purity and quality.

Nepali authorities has asked Patanjali to recall its 6 products

In a big blow to Baba Ramdev, six Patanjali products have allegedly failed the microbial tests in Nepal. According to reports, Nepal’s Department of Drug Administration on June 21, reportedly ordered Patanjali Ayurved to recall six of its medical products that include Divya Gashar Churna, Bakuchi Churna, Amla Churna, etc. Notably, the department has also urged stakeholders not to sell or prescribe these products.

In another setback for ayurvedic products company Patanjali, the Canteen Stores Department (CSD) of the Indian Army has banned sales of their amla juice with immediate effect. The CSD is the department which is responsible for running several military canteens around the country where armed forces personnel can purchase goods at subsidized rates.

This move comes after the CSD sent samples for testing to the Central Food Lab in Kolkata and received a negative report about the quality of Patanjali amla juice.

Headquartered in Haridwar, Patanjali Ayurved was co-founded by yoga guru Baba Ramdev who remains the face of the company.

Patanjali is valued at around Rs 30 billion and this incident is bound to raise some serious quality-related questions as this is not the first time that an adverse report has been received about their products.

Patanjali’s marketing and advertisements speak of the higher quality of their products. Also by using the tagline of “Swadeshi,” the company managed to achieve immense popularity among Indian households in just a few years.

However, this latest report might cast a cloud over that. In a letter dated 3rd April, the CSD has asked all its canteens around India to make debit notes for their existing stock of Patanjali amlajuice so that the products can be returned to the company. This comes after an adverse quality report was received from the Central Food Lab in Kolkata after Patanjali amlajuice samples failed product tests. According to news reports, the lab has said that the juice is unfit for human consumption.

The Central Food Lab in Kolkata is the same laboratory which had found excessive traces of lead in samples of Nestle’s Maggi noodles after which they were pulled out from the markets.

The CSD of the military runs 3,901 canteens and 34 depots across India. This order is therefore expected to hit the sales of Patanjali’s amlajuice as CSD canteens account for 5-7% of sales for most consumer goods companies in the country.

There have been similar instances in the past where Patanjali Ayurved had come under a cloud due to questions about the quality of their products. In November 2015, the Food Safety and Standards Authority of India (FSSAI) has issued a notice to the company after it was found selling Patanjali noodles and pasta without the appropriate licenses.

As early as 2012, a case had been filed against the company after Patanjali products such as mustard oil, besan, pineapple jam, salt, and honey had failed to meet quality benchmarks after tests at a lab in Rudrapur. In January 2016, a Lucknow resident named Yogesh Mishra filed a complaint against the company after he found fungus in the Patanjali ghee packet that he had purchased.

In December 2016, a Haridwar court had slapped a fine of 11 lakhs on Patanjali for “misleading advertising” after it was found that the company’s products were manufactured at a different location as opposed to the company’s claims that they were made in their own units.

Against this history, this latest decision by the military’s CSD has cast further questions on the quality of Patanjali products and the claims made by the company in its advertisements.

The main lesson from this incident is that we all need to be very careful and aware about the quality of food products when we purchase them for the consumption of our family.