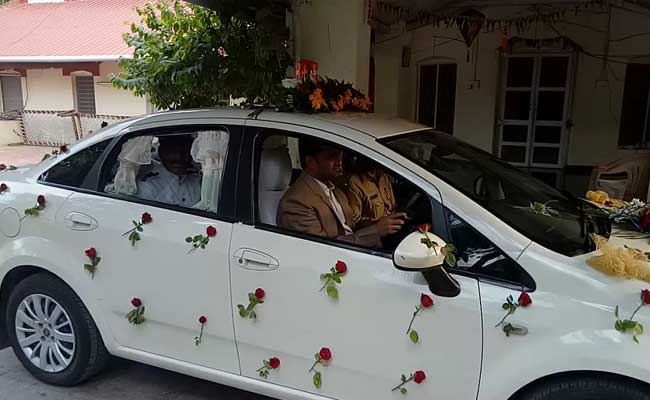 If you want to judge a person’s behavior, see how he treats his subordinates. Power has nothing to do with the attitude of any officer but his behavior tells the complete story. The small but powerful gesture by G.Sreekanth who is the collector or Akola in Maharashtra laid an example of good nature and respect for the hard work of the subordinates.

It all started when his driver’s day of retirement came. Digambar Thak, who has driven the collector’s car for more than 30 years and served 18 collectors in his tenure, was retiring from the post.

The car was decorated just like a groom’s vehicle for a wedding. G.Sreekanth, instead of choosing the back seat, requests Thak to enjoy the last trip on the back seat while he drove him to the office.

The photograph of Mr. Sreekanth driving the car was posted on twitter Maha Info Centre. It was shared and retweeted 100s of times by the twitter users and all of them appreciated the gesture.

Akola Collector G Sreekanth gave Great farewell to his driver Digambar Thak on his retirement day by driving himself.Thak was seated on back pic.twitter.com/WalWzpDXXe

Recognizing the 35 years of service

Sreekanth said on the ceremony that for over 35 years Thak has helped the state with his services. He wanted to make sure that Thak’s last day to the office remains a happy memory throughout his life. A ceremony for his farewell was also organized by Sreekanth in the office.

It is very important for every officer and the state to recognize the hard work done by employees on every level. The boost they get by the recognition is more important than anything else.

It is the hard work of the employees that make the state successful and if they leave the office with a smile, the world can be a better place to live. Small gestures like these boost the morale of the juniors in the office and they work harder with more passion.