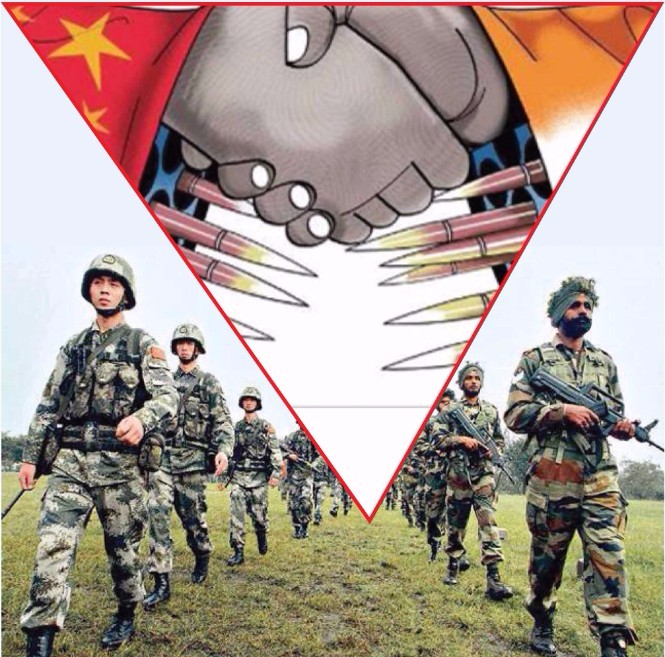 Look guys, I am no peacenik. Even though age has toned me down a bit, I remain a hot headed Punjabi. And coming from a defense services background, I have patriotism instilled to the core. And when you add the last 25 years of my life that I have spent initially questioning and then following Saint Dr. MSG, My patriotism and sense of responsibility to my country has grown manifold. Even though I played the role of Pakistani terrorist leader in the film ‘Hind ka Napak ko Jawab’, I am furiously anti-Pak and a ‘Chinese products, hater. But while we hold our head upright, we need to keep our feet firmly on the ground. In the present context, I am referring to the India China stand off at Doklam.

I have visited the war museum in Ladakh and cried, standing in front of the picture of Param Vir Chakra winner, Major Shaitan Singh Bhati and countess other heroes. In that epic battle, we kicked them hard. I have read accounts of what happened at Sumdorong Chu and I trust that the Indian army is equal to the task.

But as I said, we need to keep our feet firmly on the ground. While Gen. Rawat might have spoken of a two front war capability, the truth is that the rhetoric does not replace reality. China has powerful and proven lasers to blow holes into satellites, we probably don’t. That means that we can be crippled early and dangerously.

They can destroy night vision devices on our tanks and armoured formations, they can hit our UAV’s and blind them. China has excellent last mile infrastructure to the battle front, and we don’t. They can get tanks in almost anywhere and we can’t. China has deployable microwave weapons that can fry our electronics. Planes, tanks, wireless communications, telephone exchanges, helicopters, guns, there is nothing today that defies microwave. Most importantly, China is self-reliant in defence technologies.

In fact, at least one recent Sukhoi crash in Arunachal Pradesh may have been the consequence of microwave attacks, , some analysts privately conjecture. China has a massive Make in China capability to ramp up the production of any weaponry they need. They can hold out much longer. There are crores of Chinese mobile phones in India, lakhs of them with men in uniform which can be used to get real time info on everything that we do.

They have a fairly well developed ballistic missile shield capability. In cyberspace, they are a much stronger adversary. Plus, they have the geographic advantage & being at a higher altitude at several places. Our air force and army does not have a unified fighting capability. Our air force is 10 squadrons short on fighter planes.

Our Make-in- India program is yet to become a reliable backup for majority of our weaponry. If we look at the area under threat, we do not have any real strategic depth with a very thin strip of the Siliguri corridor. And in the ocean, they have built a string of pearls all around.

We need to analyse what we have done wrong for all these years. We need to fix what is broken. We are a formidable power, but China is a super power right now. We need to develop techno-military capabilities and deploy them adequately. This is not the age of foot soldiers, it is the age of electronic warfare, lasers and Electro-magnetic bombs.

With communications and electronics destroyed, UAV’s knocked out of the sky and satellites knocked out of orbit, one can not hope to win. Kashmir is on the boil with the army facing a very tough situation. China has an opportunity to give the world a strong message against meddling in the south China sea. The Siliguri corridor is a chicken’s neck and time is also not on our side. I think We need to diplomatically wriggle out now and plan for the future.

Even a loco-regional conventional war in the north east could become very risky. China is pressing on and preparing for the offensive. The biggest danger is that an escalation in the north east may be followed by stepped up Pakistani meddling or even a Kargil repeat in Kashmir. Nawaz Sharif is more or less done, and Gen. Bajwa is China’s man. The US is unlikely to come to our rescue . We have not done our homework right.

We have not given the defense forces what they needed all these years. And most importantly, we do not like to co-ordinate. Gen Manekshaw had the gall to tell late Indira Ji that the time was not right. And when he chose the time after preparing well, he delivered the results like a professional soldier. We need to get time on our side. How, is for our leadership to figure out.

The Indian army is battle hardened due to its experience to multiple wars. The Kargil was its last war where it disclosed a superiorly positioned adversely by sheer grit.

China has threatened to make incursion in Kalapani in Uttrakhand and POK, So the biggest danger is that the war will not remain loco-regional and become full blown. Secondly, the Pakistan will indeed, use the opportunity to try and free Kashmir.
So, in such a situation, nuclear restraint will not remain a feasible option. We may have to call upon other nations to jump into the fray, to our aid. So, even in the face of the fact that the Indian armed forces perform admirably, the challenge is certainly not an easy one.

As Saint Gurmeet Ram Rahim Ji put it to the media on His birthday celebrations on 15th of August, ”It is better to call for a boycott. Last time we had done so, their economies wobbled. If the same is done with renewed vigour, their economic bubbles will burst and they will be far too busy with their internal problems to continue war mongering”.

Let us hope for the best!!
PS: I salute and trust the Indian army, but I do not want them to pay for someone else’s mistakes.