DadaSaheb Phalke Award to MSG for Most Popular Actor, Director and Writer 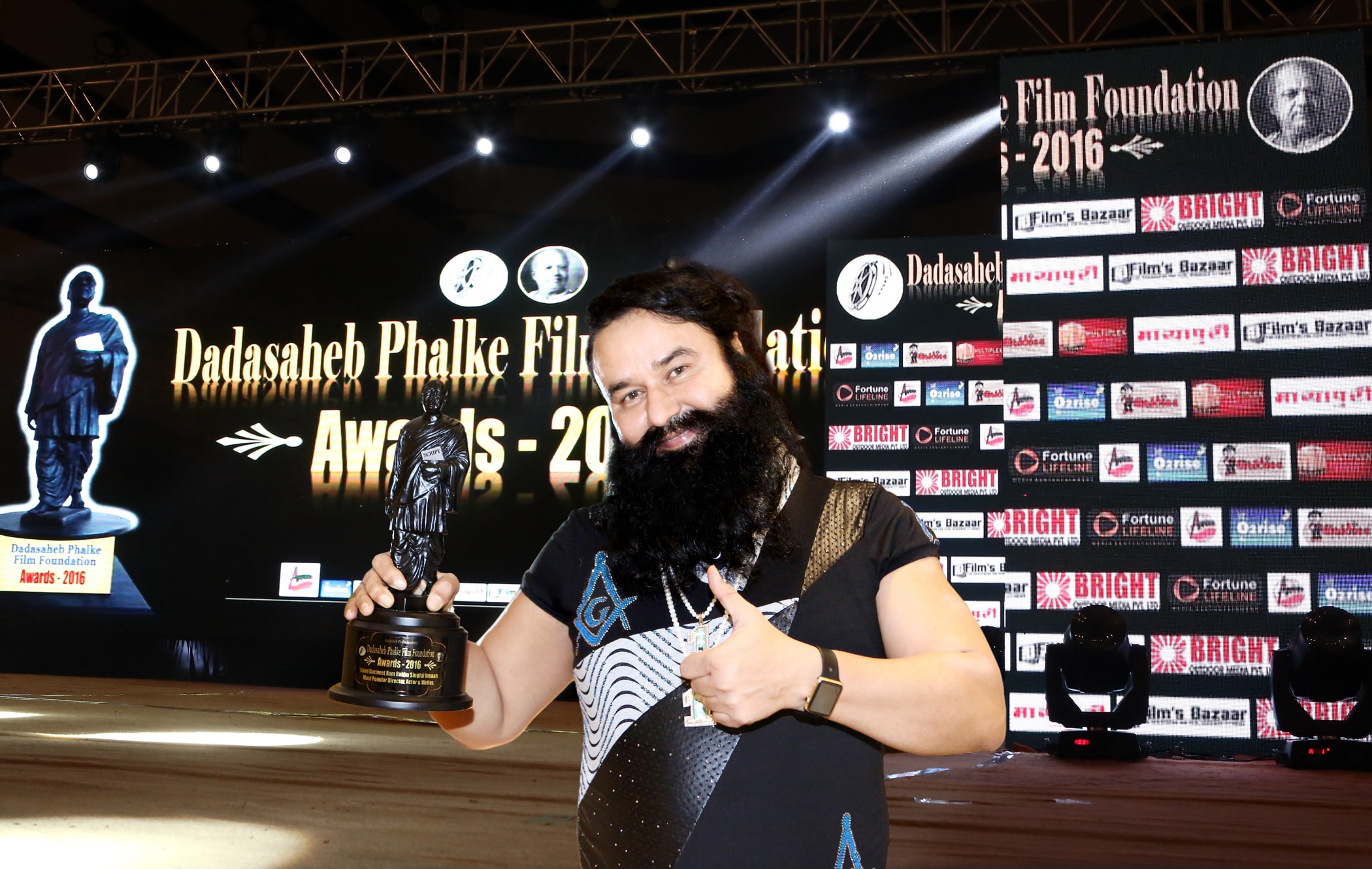 The year 2015 proved to be one of celebration for the fans of the Revered Saint Dr. Gurmeet Ram Rahim Singh Insan. The debut venture, MSG – The Messenger, received a phenomenal response. Next, the second cinematic outing, MSG 2 – The Messenger went on to complete more than 200 successful days at the box office, breaking all records and grossing 507 crores.

Two new films by a debutant donning several hats of a writer, direcor, actor, art director, singer, lyricist etc is unheard of! And an award on the second film is no mean feat.

On 24th April, the Saint was honoured with the  esteemed Dadasaheb Phalke Film Foundation Award, 2016. He received the award in not one or two, but three different categories – for the most popular Actor, Director and Writer of the year at the Tulip Hotel on Juhu Tara Road.

The appreciation and accolades

The Chairman of the Foundation, M. Ashfaque Khopekar, extended his appreciation and described Dr. MSG as “A social reformer who initiated more than 119 welfare activities and is honoured with more than 55 Guinness, Asia, Limca and countless other recognitions for noble causes. His contribution to the Indian Film Industry is remarkable for making films on such causes.”

After the Revered Saint made an announcement on Twitter – “Good news 4 all of U! Honored wid Dadasaheb Phalke Film Foundation Award for most popular Actor, Director&Writer. #MSGDedicatedAwardToGuruji” – the hashtag used by him caught on and, in no time, was trending worldwide.

The Revered Saint addressed the highly enthusiastic crowd who had come to receive him at Sirsa, and expressed satisfaction that the idea of facilitating social change through the medium of cinema is now establishing itself.

Making an appeal to the mainstream media, he asked the film industry to use cinema as a vehicle for social reform, and to avoid propagating questionable morals for commercial gains. Social awakening could also translate into commercial gains as seen by the massive success of MSG 2. 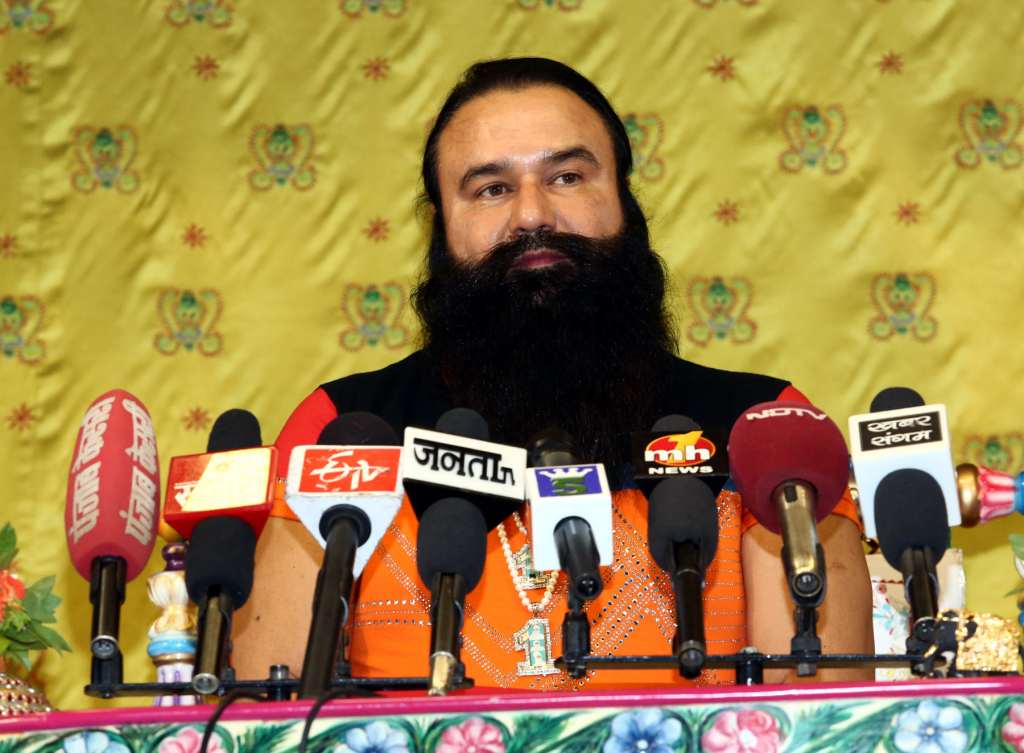 Speaking to the media after winning the prestigious award, the Revered Saint said that initially his films were warmly-received by crores of fans and they were now finding resonance with the film industry as well.

He added,“It is the grace of the grace of Almighty Gurus and the love and appreciation from fans, otherwise a lot  of negative forces don’t want a Saint and a good Samaritan to succeed; but if God wills, then progress is unstoppable.”

He declared that his principal aim was to bring the society together through the propagation of humanity. He has been striving relentlessly to achieve this aim through all kinds of efforts ranging from spiritual congregations, music concerts to film-making.

He said that, in the current times, the interest of the youth leans mainly towards cinema. Keeping this interest in mind, he decided to reach out to them differently. He felt it is best to motivate people in ways that they can connect with.

The fact that crores of people have given up intoxicants of all kinds, and huge businesses have moved out of the sector, is evidence that his methods are working.. The number of people who attended the spiritual congregations every week have gone up by about 6 times since the release of the films. While interacting with the media, he reiterated that though he was a filmmaker and also an actor now, his real identity and calling was that of a saint.

The economics of intoxication

When asked about the possibility of securing a nation-wide prohibition, the Revered Saint hoped that steps would be taken in the direction. He also assured that if water was used and disbursed in a proper way, the production of herbal and allopathic medication could bring a lot more profits and affect the economy more positively as compared to the liquor industry.

The contribution to the film industry

The Revered Saint has not only benefited from the medium of film-making but also made returns to it. The Dera Sacha Sauda has now established a state-of-the-art VFX hall, a shooting hall, and an audio studio. The intention is to facilitate people making films in that part of the country so that they do not have to incur additional costs in having to travel to Mumbai.

Additionally, lecturers have been invited to the schools established by the Dera so that students with an interest in VFX can learn the subject and achieve proficiency in the same.

The initiation of a new social welfare movement after every achievement is a legacy of the Dera. To this end, the Revered Saint announced that a new welfare movement would be initiated on 29th April during the spiritual congregation.

The upcoming cinematic venture, Online Gurukul, is set to be bigger and better than both the preceding movies. This time, an effort is being made to present the teachings imparted by Vedas and old scriptures. This film will see the Rockstar Saint essaying the roles of not one or two, but six different characters.

The VFX of the film are being done by the company that previously did the VFX for films like Lord of the Rings and Spiderman. Also the choreography of the songs has been taken up be ace choreographer Ganesh Acharya.

With this announcement, his fans, the industry and cinema-goers in general are also eagerly looking forward to see in what way Online Gurukul touches and transforms society.

Shruti Gokhale, Mumbai (with inputs from Parampreet Chanana in Sirsa)