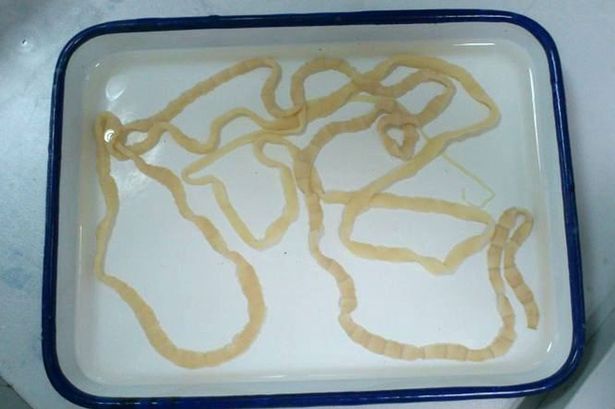 A recent evidence based study upon Tapeworm infestation has proved humans at an increased risk of getting them in body parts such as the eyes, muscles and even spinal cord. This is unlike the common belief that tapeworm at times troubles by entering the brain and thereby causing Cysticercosis.

Prof RK Garg, head of neurology department at King George’s Medical University and principal investigator says, ‘Our study has turned out to be world’s biggest with 60 cases put under treatment suggesting people in India and specially this part of the country are at greater risk. This is because cases of tapeworm infestation in humans other than brain number are only 56, across the globe, collectively.’

Cysticercosis is most commonly known disease

Tapeworm cycle, as is commonly understood, is that it enters human gut through food and leaves out with excreta as egg, which again comes back to human body with food. Problem starts when it breaks cycle and enters organs. Brain was one such known organ and when tapeworm enters the brain causing trouble the disease is called Cysticercosis, which is most commonly known to have caused seizure like impact. Tapeworm are flat, segmented worms that live in the intestines of some animals.

Prof Garg’s study is first of its kind

The first of its kind study was titled ‘Disseminated cysticercosis: clinical spectrum, Toll-like receptor-4 gene polymorphisms and role of albendazole’ and was published in October edition of the journal Medicine. The study began with a few cases where the patient came undiagnosed. They showed up problem of multiple growth on the upper layer of skin commonly termed as muscular cysts. Many such patients also complained seizures, and thus were referred to department of neurology.

“The first thing we noticed was uncommon picture of the brain where instead of one tapeworm there were multiple. And the CT scan pictures showed the brain appearing as if a starry night sky. This happens when tapeworm number not just one or two in the brain but multiple”, said Professor Garg. Going beyond the conventional belief he started screening patients who came to the department with cysts in muscles. Prof Garg says the screening found 60 such cases in a period of two years. They were advised CT scan for the body as well and thoroughly examined.

Cysts turned out to be tapeworm infestation

The cysts turned out to be tapeworm infestation of the skin and so much that they had spread all across the body. About the study he said 60 consecutive patients with disseminated cysticercosis were enrolled for the research. Twenty patients, who gave consent, were treated and followed for 6 months. The infestation and eliminated was reduced and patients became normal.

Cases of muscle cysts can now be examined with a different perspective of tapeworm infestation. On why this happens to some and not to all who have tapeworm in body Prof Garg said it depends upon individual’s resistance power. He says cysts in brain causes seizures. Treatment helped in reducing number of cysts in brain and reduce probability of seizures. He mentioned that it is contaminated water and ill cooked food that spread eggs to brain and other body parts. This can be prevented by provision of safe water supply and avoiding open air defecation.