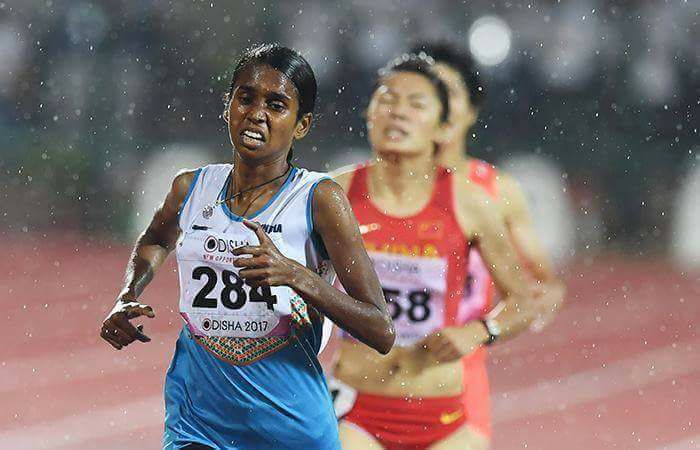 One of the four children of daily wage earners, P U Chitra, hailing from Munrad village in Palakkad district of Kerala needs a job to support her parents who are now finding it difficult to continue in farming. The existing ‘Queen of Asia in the mile’ P U Chitra ran without shoes (barefoot) in her childhood because she could not afford them.

At the age of 12 years, her physical education teacher identified her potential to be a great athlete and started imparting training to her with how so ever little resources they had in their village. She started running without shoes as she was poor enough to buy them!!!

Here is P U Chitra, the existing ‘Queen of Asia in the mile’ who won Gold in the women’s 1500 meters race at the 22nd Asian athletics championship 2017 organized at Bhubaneshwar, Odisha, India. The 1500 meters race is supposed to be the toughest races to run and win. She ran beyond the expectations of one and all and clocked 4:17:92 minutes. The best thing was that she broke her career best record by seven seconds and won Gold medal for India.

Many a times, the athletes shoot into prominence in their domain for a couple of days or weeks after winning a big game. In the end they go into oblivion and the country starts applauding other popular sports. This sorry state of affairs is a regular feature amongst Indian athletes. They are sometimes bound to sell their awards, trophies or medals for meeting daily needs. Who is responsible for that? Where we are wrong? Such questions when asked tingles the mind to the core. The prime reason being apathy of those who are sitting at pinnacle and deciding about how the things should run. Most ironically, they had never stepped in the field and experienced the pains and struggles an athlete has to undergo.

When Indian Marathon runner, O P Jaisha fainted in Rio Olympics due to hot and humid conditions and alleged that no Indian sport authority official was present to offer her water, a debate on plight of sports federations in India started again. To the astonishment, only 1 of 27 Indian sports bodies had an athlete as president.

This is the main reason for the downfall of our sports. You need to be a doctor to understand disease and finally suggesting a cure, of course a lawyer or artist cannot do that. The most popular sport in country also faced similar problems but there are many agencies that are interested in placing their problems in public domain, the other less popular games are not that lucky. The discrimination is evident and rightly quoted by Harsha Bhogle in 2003 that Weddings and Birthdays in Indian Cricket attract more attention than trophies in Indian hockey.

The best step in culmination of this biasness will be appointing the right person at right place. Let the veteran athletes be the front runner in policy planning for sports than the politicians who even do not understand sometimes the difference between a volley and basket ball: Saint Dr MSG