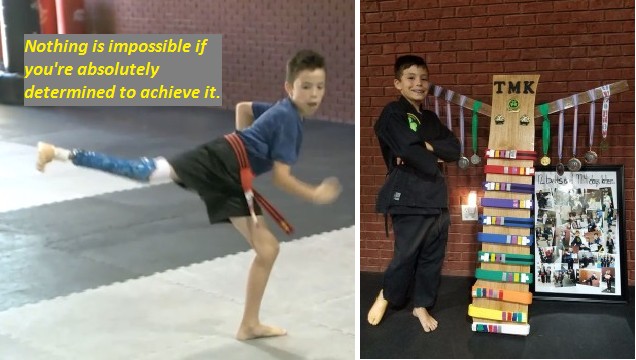 As they say: nothing is impossible if you’re absolutely determined to achieve it. And a 9-year-old kid from Florida has managed to prove just that and has set a wonderful example for all of us. Toby King is a little child who has a prosthetic leg. His leg was amputated from the knee at the age of 1 after being diagnosed with fibular hemimelia. This brave young kid lost a part of his leg at an extremely early age. But one thing he did not lose was his courage and determination.

At the age of 9, Toby has now earned his black belt in the martial art of Taekwondo. Yes! Despite having a prosthetic leg, Toby managed to defeat several other able-bodied children to earn this prestigious martial arts award.

And it has not been an easy journey. Toby’s mother says that there have been several times when it was only his determination that kept him going. Due to his prosthetic leg, Toby experiences massive pain if he indulges in a strenuous activity like Taekwondo. However, Toby did not let his pain defeat his dreams and determination.

The courage of this 9-year-old boy should be an immense source of inspiration and encouragement for all of us. Often in life, we tend to give up on our dreams after minor setbacks. We sometimes let adversity get the better of us and get discouraged.

Toby’s victory over his circumstances is a great example of how perseverance pays off in the end. There is a little fighter in all of us who we have chosen to ignore. Let this story be an example to us to keep fighting for our dreams even in the midst of difficult times and to make a resolution to achieve success purely through our hard work and courage.