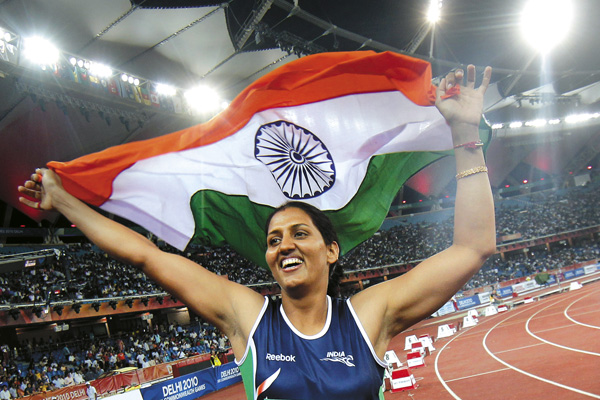 While waiting to pass through a railway crossing at a town in Rajasthan’s Churu district on New Year’s Day, two frightened teenage girls held her attention. The reason behind their fear was a group of bullies on a bike who were harassing them.

The athletic woman got out from her car and confronted those louts. In a matter of seconds after looking at the woman, they accelerated their motor bike as fast as they could.

But, to their surprise, the woman in front of them was none other than Olympian Krishna Poonia – known to throw a 1 kg discus more than 60 m in international competitions.

Poonia, whose husband hails from Churu, weaved her way behind the flying bike for more than 50 meters and managed to catch hold of one of the 3 louts.

The filmy chase at around 4 pm on the Haryana border managed to gather a large crowd by the time Poonia informed the police to hand over the catch. .“When I saw those two girls being harassed, I thought that they could well have been my daughters. That made me go after the men,” the 2010 Commonwealth Games Gold medalist said.

“The police station was barely two minutes away from the spot but it took the cops some time to reach and I had to phone them twice. How will cops ensure women’s safety if they arrive late?” she wondered.

Poonia then accompanied the girls to the nearest police station and completed the necessary formalities for lodging the case.

“The problem with our society is that there are not many people who would raise their voice and protest when they see a girl being harassed. Instead, they choose to stay mute spectators,” said the athlete who represented India in the Beijing and London Olympics.

In conclusion, we can say that all it takes to raise voice against such incidents is just a little courage.  This courage will ensure the safety of the women and children of our society.