Success Party of film “Jattu Engineer” celebrated in the Capital 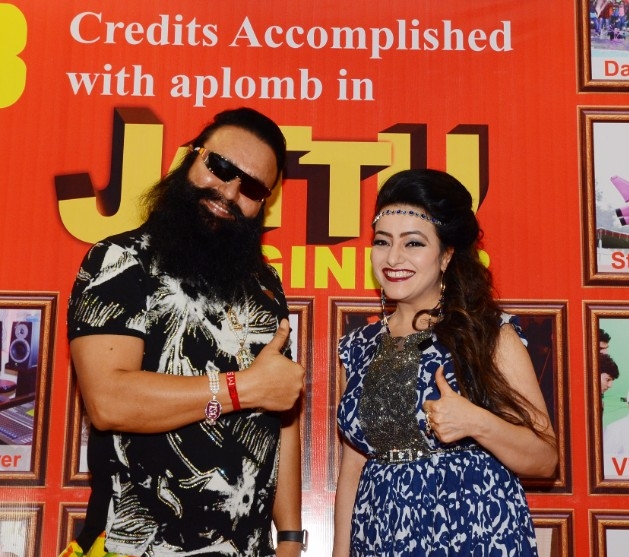 New Delhi, 7 June: Just like its promotions, the success party of Jattu Engineer too was organized in the capital city of New Delhi. On this occasion, luminaries from the social as well as political fields lauded the work done by Guruji.

They also congratulated and appreciated the efforts made by him to bring about social change through the medium of cinema. On this occasion, Guruji also demanded that the cow be declared our national mother and started a signature campaign to this regard.

People start gathering at The Lalit on Barakhamba Road in New Delhi since early morning for participating in the success party of Jattu Engineer. As time passes, the crowd only seemed to be getting bigger. The entire crowd broke into a spontaneous cheers as soon as Saint Dr. Gurmeet Ram Rahim Singh Ji Insan reached the venue. 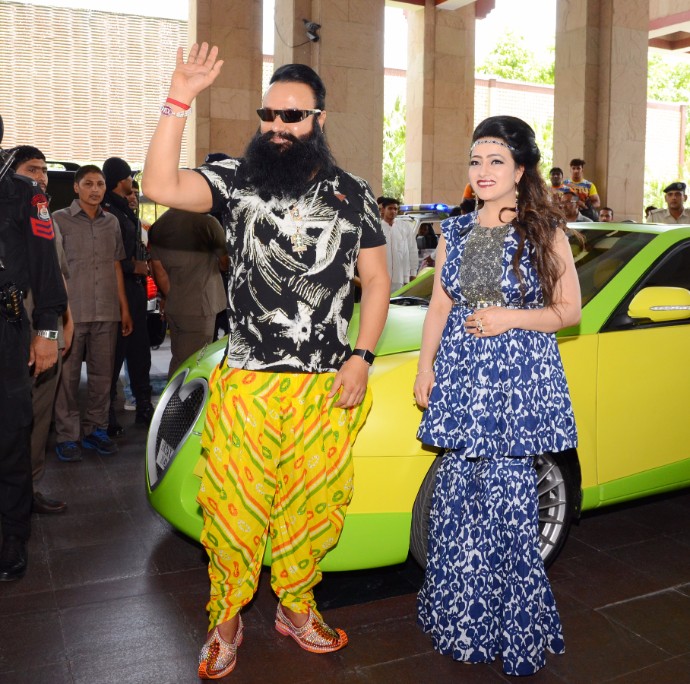 Jattu Engineer, i.e., Dr. MSG reached the venue at 1:08 pm and was given a grand welcome by all the people. He then proceeded to speak to the assembled media about the thumping success of Jattu Engineer.

After this, he headed straight to the main celebration area where a huge number of people were waiting for a glimpse of Guruji. 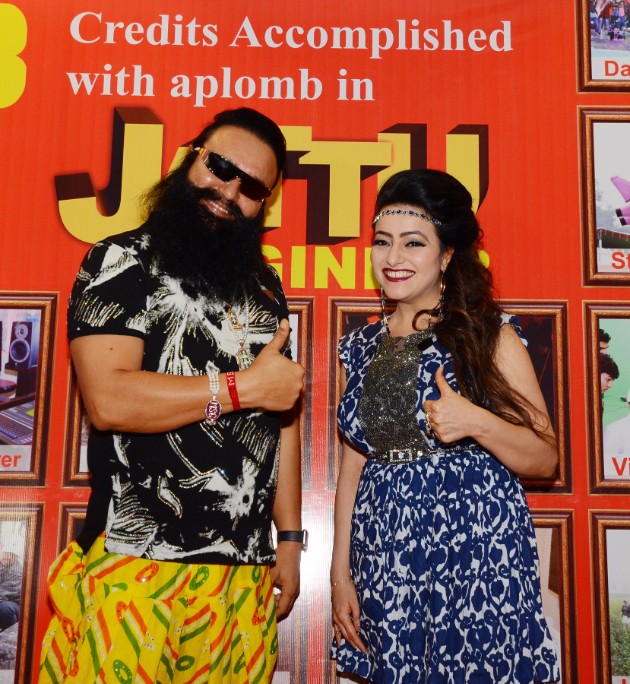 The onsite audience rose up to its feet and started cheering as soon as Guruji entered the CBR Hall along with his daughter and co-director Honeypreet Insan along with other members of his family. After meeting the assembled personalities from different fields, Guruji took his seat at 1:18 pm. The details of the upcoming program were then announced from the stage. 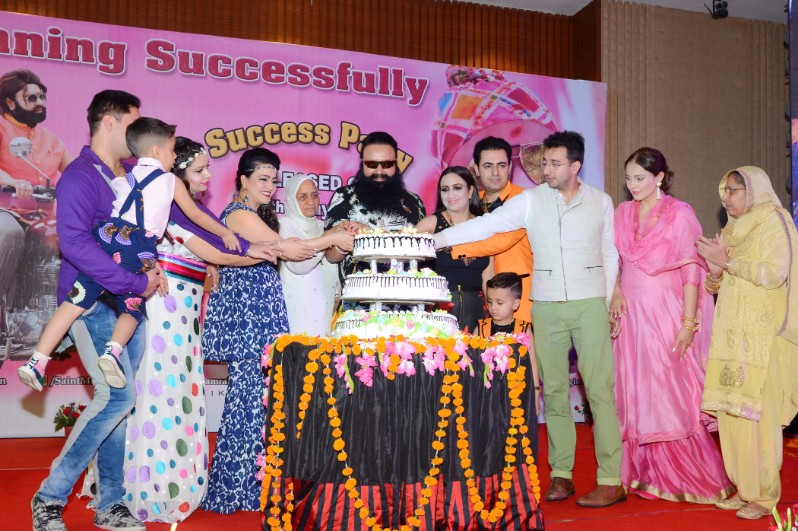 The host of the evening announced that Jattu Engineer had been successfully released in several other countries in addition to India. Until today (the 19th day), the film has done a business of Rs 291 crores at the box office. Therefore, the film has not only joined the 100 crore club but is also all set to cross the 300 crore mark.

Dr. MSG graced the stage with his presence at 1:52 pm. After reiterating his message of the need to protect cows, Guruji celebrated a cow milk party with everyone. All the assembled guests were invited on to the stage and given a glass of cow’s milk thus starting a new tradition. 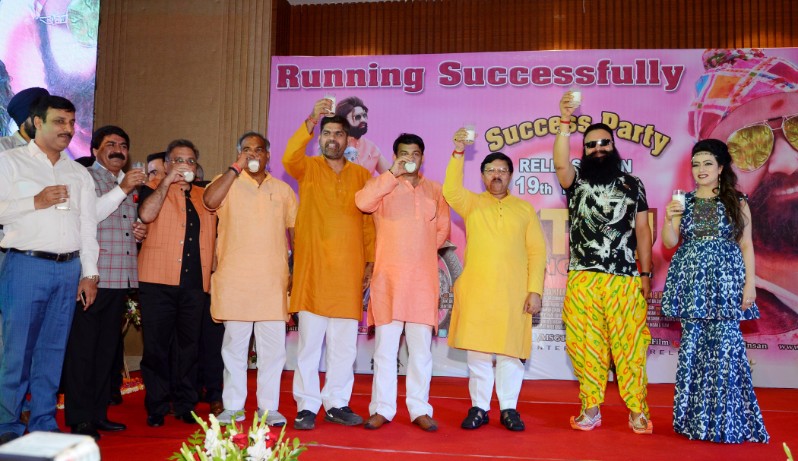 Cow’s milk was distributed among rest of the audience too in just a matter of minutes. During the ceremony, 30 underprivileged children were given schoolbags and study material by the Guruji. 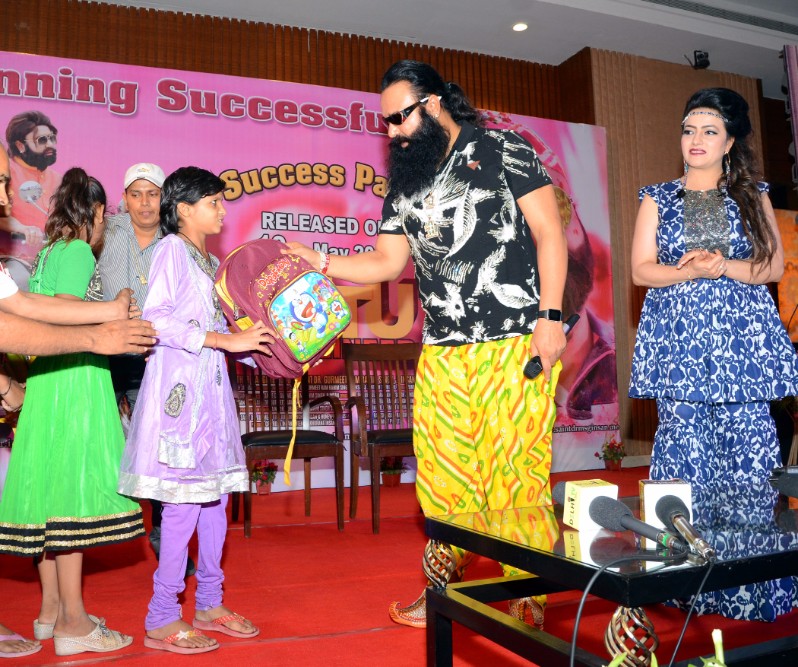 On Wednesday, Guruji began a new campaign from the capital city of New Delhi. He demanded that the Indian government declare the cow as our national animal and began a signature campaign in this regards. 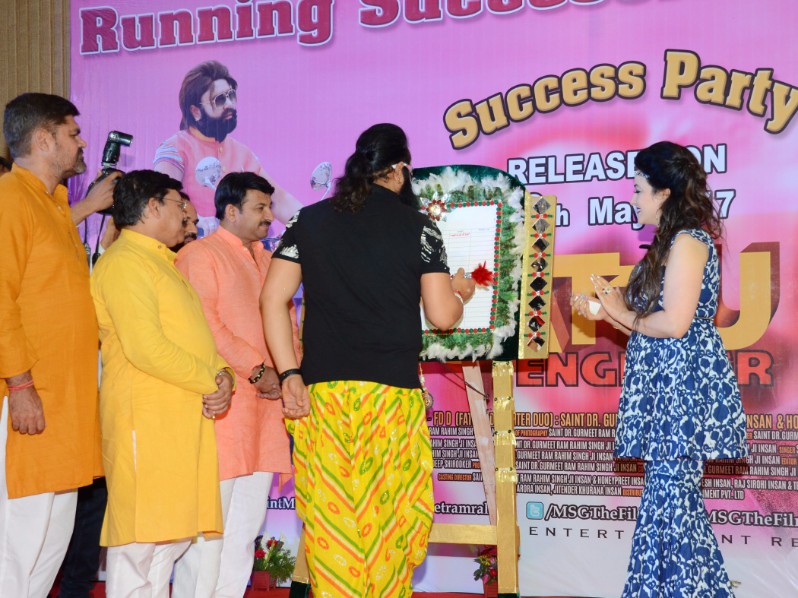 Dr. MSG inaugurated the campaign by giving his signature. Subsequently, all the guests assembled on stage also lent their signature. At 01:56pm, Guruji declared this endeavor as a national campaign.

The Delhi BJP Chief Manoj Tiwari, National General Secretary of the BJP Kailash Vijayvargiya, Delhi BJP leader Shyam Jadhav, Chairman of the Haryana Housing Board Jawahar Yadav, Education Minister of Uttarakhand Arvind Pandey, Union Minister of State for Social Justice and Empowerment Vijay Sampla, UP MLA K.P. Malik and several other luminaries from the fields of social work and politics lent their signature to the campaign and requested the Prime Minister of India to declare the cow as our national mother.

Speaking to the media during the success party of Jattu Engineer, Dr. MSG said that films are bringing about a positive transformation in our society. He said that after the release of Jattu Engineer, several village panchayat leaders approached him and had a discussion on installing bio gas plants in their villages. He said that they are being provided guidance in this regards. He also said that he is extremely happy that the message of social transformation was being sent across the world through his movies.

Speaking about his next film, Guruji said that the shooting of Online Gurukul has already been completed. He expressed his hope that the film would release in cinemas across India by the end of this year. He also said that Online Gurukul incorporates several VFX special effects and local youth have been trained in this area. He expressed happiness about the fact that their lives were being transformed through self-empowerment.

Speaking of the cow milk party at the celebration, Dr. MSG said that there has been a massive debate in our country on the issue of eating beef. He said that this is happening despite the fact that no religion asks its followers to consume the flesh of the cow. We have all considered the cow as our mother since our childhood. He said that we all consume the milk of the cow, and therefore, he felt that it was important to do something for the protection of the cow.

Dr. MSG also announced the production of another movie called The Birth. He said that this film would be along the lines of the famous movie Avatar. In addition to this, there are talks going on about starting a show on television as well. The show will be called Aan-Baan-Shaan, Mera Hindustan. He also announced the start of a comedy show called The Laughter Show.

Guruji said that the signature campaign that has been started for declaring the cow as the national mother should garner crores of signatures and public support. After that, these signature will be handed over to the government in the form of a petition. He said that his goal is to positively transform our society by eradicating all social evils. 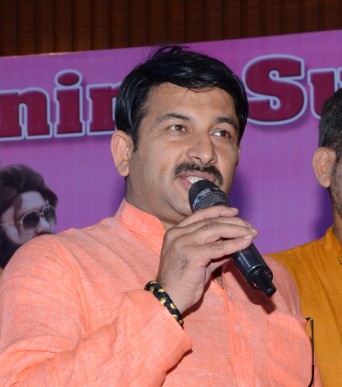 Noted film actor and chief of the Delhi BJP Manoj Tiwari said in his speech that Jattu Engineer has reached 291 crores until now at the box office. He also said that the movie will cross the 500 crore mark in the next 15 days.

Mr. Tiwari said that while he personally had made over 98 movies, Guruji’s film trumps all of that. He also appreciated the message given in the movie.

He also said that it is the demand of all those assembled that the cow be declared our national mother.

He wholeheartedly declared his support immediately after Guruji announced the signature campaign. He also said that the noble campaign started by Guruji will gain traction across the entire country.

Spirituality presented in the form of New India: Vijayvargiya 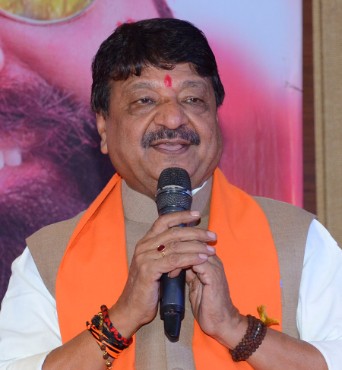 On this occassion, senior leader of the BJP Kailash Vijayvargiya said that Guruji has successfully delivered the message of spirituality in a form that is relatable to New India.

He said that Guruji has taught several virtues to the youth through the medium of cinema.

Mr. Vijayvargiya said that he has always been a spiritual person and recounted the time when Saint visited his house and was fed by Mr. Vijayvargiya’s mother.

He said that he will never be able to forget this spiritual relationship that he shares with Guruji. He applauded the efforts made by Guruji in the area of transforming society and said that this Saint has started a new spiritual tradition in India.

He also said that the cow is our mother as over 33 crore Gods and Goddesses reside within the cow. 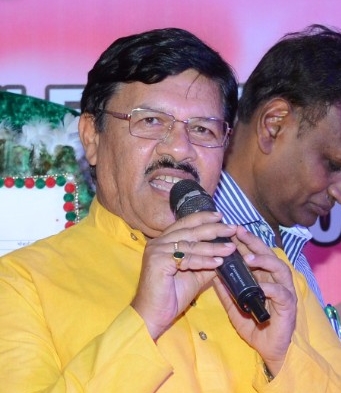 Vice President of the Delhi BJP Shyam Jadhav said that Guruji has delivered important social messages through the medium of cinema.

He said that Jattu Engineer wonderfully delivers the message of cleanliness, Beti Bachao Beti Padhao, importance of sports and self-empowerment.

He also said that the message given by Guruji in his sermons as well as his movies is extremely important.

Guruji is among the most unique saints in India: Dr. Uditraj 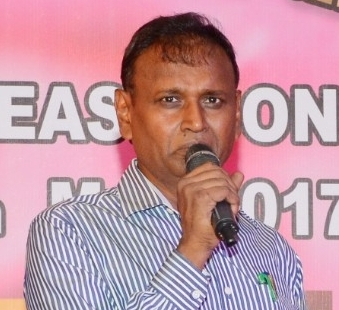 Member of Parliament Dr. Uditraj said that Saint Dr. Gurmeet Ram Rahim Singh Ji Insan is among the most unique saints in our country as he is involved not just in the area of spirituality but also is an artist par excellence.

He said that he has seen the result of Guruji’s tireless work in the areas of education as well as in his endeavor to fight social evils.

Dera Sacha Sauda has been doing social work even before the government: Jawahar Yadav 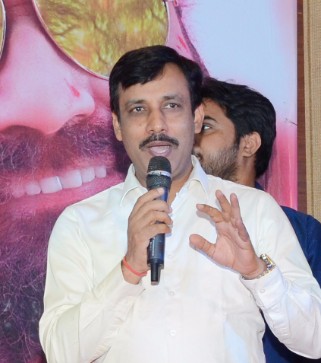 Chairman of the Haryana Housing Board Jawahar Yadav said that the government of Haryana has been doing some amazing work in the area of education as well as women’s empowerment. He said that the Dera Sacha Sauda had started this work much before the government.

Just like the RSS, it is important to see the Dera Sacha Sauda from within in order to understand the importance of the work that it does. He said that he had visited the Dera Sacha Saudi when the government launched a campaign to raise awareness about the issue of electricity theft. There he saw numerous projects that were being undertaken for bringing about a positive change in society.

He also said that after seeing the work of waste management being done at Dera Sacha Sauda, there is absolutely no need for anyone to go overseas to learn these techniques. Be it a Gobar gas plant or anything else for the transformation of society: all these projects are being successfully carried out at the Dera Sacha Sauda. He also said that all future films made by Saint Dr. MSG for the transformation of society will continue to be tax-free in Haryana.

No religion says that you should eat the flesh of cow: Vijay Sampla 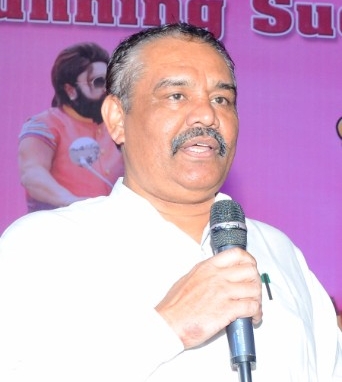 Union Minister of State for Social Justice and Empowerment Vijay Sampla completely agreed with the statement of Guruji in saying that no religious book says that it is necessary to eat beef.

And if thats the case, then this should not be a point of discussion or debate in our country. He also said that the cow is an organism that gives out oxygen and he greatly respects it.

Mr. Sampla said that the government has been working in the direction of protecting the cow, and with the blessings of Guruji, he was confident that the campaign would be successful.