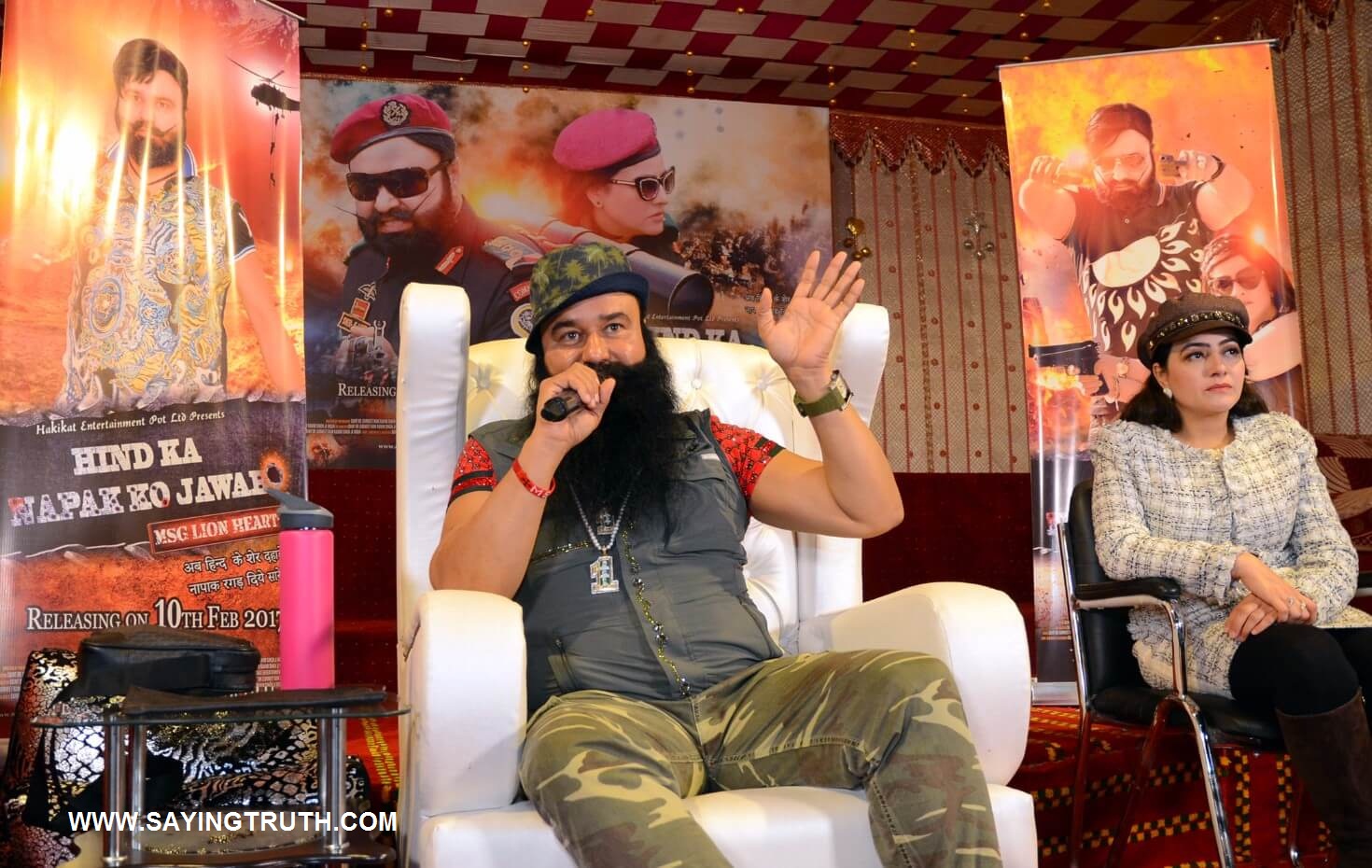 Even before the film officially releases, there is a wave of anticipation and euphoria surrounding “Hind Ka NaPak ko Jawab.” Based on the recent surgical strikes by the Indian Army against Pakistan, the movie produced by Hakikat Entertainment stars Saint Gurmeet Ram Rahim Singh Insan portraying multiple roles.

The film has been directed by the father-daughter duo of Saint Gurmeet Ram Rahim Singh Insan and Honeypreet Insan. 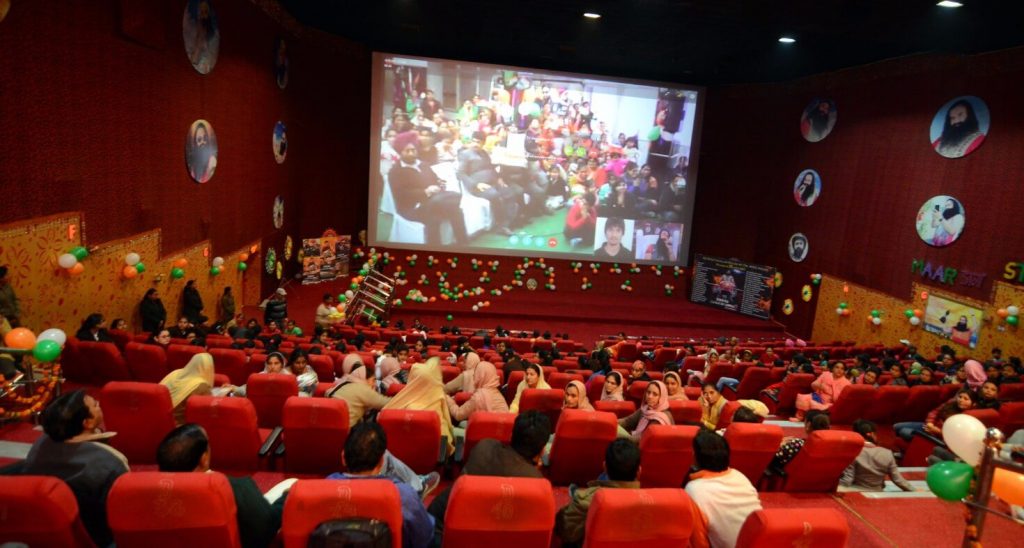 In a one-of-its-kind event, a nationwide video conference was held yesterday (Jan 30) to promote the movie which releases on 10th February. From Mahi Cinema located in Sirsa, the filmmakers conducted a massive online promotion through video conferencing which covered 7 states and 37 cities across the country.

During this video conference, Saint also released a video song from the movie and took questions from journalists across India.

Speaking at the event, Saint said that the movie depicts the surgical strikes against Pakistan carried out after the Uri attacks and its aftermath. The film is meant to be a tribute to the Indian Armed Forces and the aim is to inspire the spirit of patriotism among people, especially the youth, across the country.

In the upcoming movie showcases the Saint as a warrior who infiltrates into Pakistan and single handed takes on terrorists. In this movie, the filmmaker par-excellence has also performed the 42 different roles including that of editor, music composer, cameraman, script writer, director of photography, make-up artist, and designer which is an overwhelming achievement.

Similarly, his daughter and co-director Honeypreet Insan has performed 21 different roles in the making of the movie.

The movie “Hind Ka NaPak ko Jawab” is an action film/movie which will also entertain viewers and keep them on the edge of their seats.

The film also sends out a special message to daughters of India and is meant to be a stunning response to those that are responsible for aiding and abetting terrorism.

The entire making of the movie including filming and dubbing was completed in a mere 29 days. On 10th February, “Hind Ka NaPak ko Jawab” will have a worldwide release in Hindi as well as with Tamil, Telegu, Malayalam and English subtitles (languages).

The trailer of the movie “Hind Ka NaPak ko Jawab” was released on the evening of 25th January in Sirsa, Haryana at an event that was attended by over 2.75 crore people. Just before that, the Saint also launched 5 poster and a song from the movie on Twitter and Youtube.

The audio song from the movie released on 26th January has already been retweeted over 60,000 times. The trailer of the movie has garnered over a whopping 40 lakh views on YouTube.

Based on the surgical strikes by the Indian Army, “Hind Ka NaPak ko Jawab” has been making its way to the record books even before its release. The 42 roles played by the Revered Saint and the 21 roles played by his co-director and daughter Honeypreet Insan is an achievement that has created a world record (Asia Book of Record).

The movie already has 5 world records in its honour for the highest number of people making a signature stamp together, largest number of people taking a simultaneous pledge to protect the country and the presence of 2.75 crore people at the trailer launch of the film.

Punjab Election: We aren’t backing anyone. It’s the people’s choice

When asked by the media about the upcoming Assembly Elections in the state of Punjab, the Saint has clarified that the Dera Sacha Sauda is not backing any specific political party. People from across political parties came to meet and he has given his blessings to all of them.

He said that in the end, it is the decision of the people as to who they support. The Saint has said that volunteers have been conducting meetings to discuss the specific issues from their particular regions. The Saint said a lot of issues from Punjab such as the menace of drugs, poverty, and the agony of farmers are well-known along with several other ones highlighted by the media. He said that volunteers are conducting meeting across different regions of Punjab to identify candidates who will work towards the benefit of society and solve all problems.

Conspiracy behind desecration of holy books

Movie with a message

The movie Hind ka Napak ko Jawab sends a message to all anti-national elements that their activities will not be tolerated and will be met with an appropriate and hard-hitting response.

Simultaneously, the movie also sends out a message of women empowerment to all Indians. In the film, Saint Gurmeet Ram Rahim Singh Insan exhorts people to provide their daughters with the same opportunities as their sons. In order to show that, girls in the movie have been portrayed as commandos who fight for the nation.

The Saint also expressed displeasure over the fact that some people in the country were questioning the surgical strikes by the Indian Armed Forces. The film has a message for all such people. In the movie, the Saint takes on terrorists right on their home front and vanquishes them. Not just that: he works with the terrorists who have been brainwashed and shows that how any human can be brought to the path of righteousness by educating them properly.

The Saint has said that the movie will be screened across villages in India by mounting LED screens on trucks which will drive around the country. In addition to refreshments, the screenings will be accompanied by free medical camps organized for those in need.

Volunteers of the IT wing of the will also travel around the country to promote the goal of Prime Minister Narendra Modi to achieve a cashless society in India run on digital money. These volunteers will enable people to understand digital payments and educate them on the subject.

In response to media questions, the Saint said that India has made more effort than any other country to maintain peace. However, everytime India extended a hand of friendship to Pakistan, they have stabbed us in the back.

Despite the best efforts of our Prime Minister towards achieving peace, the Pakistanis martyred our soldiers just after the PM came back to the country. The movie shows how to deal with such backstabbers and sends the message that those anti-India elements who don’t understand peace gestures should be responded to in their own language.

After philanthropy and war against drugs, the Revered Saint now wishes to bring clean comedy to the country. He said that it is wrong to assume that humour can be achieved only through dirty jokes with double meanings and innuendos. He said that if production companies show interest, clean and wholesome comedy will be brought to Indian televisions.

Replying to a journalist from Fatehabad, the Saint said that alcohol should be banned not just in Haryana but across India. He said that an immediate ban on sale of alcohol should be imposed at least at religious sites. Saint appealed to the media, which is the 4th pillar of democracy, to help towards this cause.

On the reservation agitation

Speaking to reporters, Saint said that any issue of providing reservations should be resolved in a peaceful manner. When asked about the Jat agitation, he said that it is a matter for the government to consider and expressed hope that any solution that is found will be in a peaceful manner and without violence.

When asked about foodstuffs being sold in the market, Saint said that he has no problem as long as pure and quality products are being disbursed. He said it is a grave crime to be selling poison in the guise of food regardless of whether the person doing it is a Guru or a Trader.