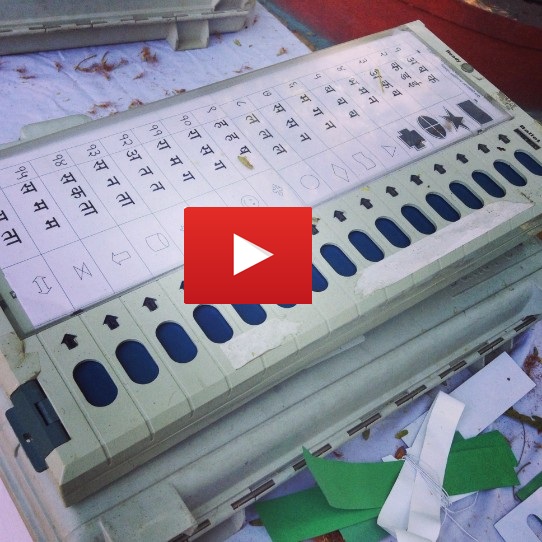 Capt steers Cong to victory, party gets majority in Punjab

Chandigarh: Congress today made a resounding comeback in Punjab after a gap of a decade, getting an absolute majority in the 117-member Assembly.

Riding on anti-incumbency, the Congress under the leadership of Amarinder Singh decimated the SAD-BJP alliance winning 59 seats and was leading in 18 other seats.

With the ruling party facing a humiliating defeat, Chief Minister and Akali patriarch Parkash Singh Badal said he would be submitting his resignation to the Governor tomorrow.

“SAD will discuss the reasons for the defeat of the party in the assembly elections,” he said.

A beaming Amarinder Singh thanked the people of the state for their overwhelming support.

“People voted out Akalis, who destroyed Punjab and rejected the AAP, who came more like a summer storm,” Singh said.

“Committed to good governance, tackling drug menace, besides health and education will be priority,” Singh said.

Congress had won 46 and the remaining three seats had gone to Independents.

Pargat, an Olympian, polled 59,349 votes while SAD candidate got 30,225 votes. AAP candidate Harkrishan Singh Walia got 25,912 votes. Pargat had won the 2012 assembly polls on a SAD ticket. Last year, Pargat switched over to Congress after he raised a banner of revolt against the Akali Dal.

The seat was earlier held by cabinet minister Madan Mohan Mittal of the BJP.

Dehradun: Uttarakhand Chief Minister Harish Rawat, who lost both the assembly seats he contested, today submitted his resignation to Governor K K Paul, while attributing the party’s “poor” show in the state polls to “flaws in his own leadership”.

“I own up my failure to rise up to the expectations of my party workers who had worked very hard despite lack of resources,” he told reporters here after submitting his papers.

However, the Congress leader will continue to officiate as the Chief Minister till his successor is sworn-in.

Rawat lost from Kichcha at the hands of BJP’s Rajesh Shukla, who won the seat by 2,154 votes. He also lost Haridwar (Rural) seat to BJP’s Yatishwaranand by over 12,000 votes.

Owning up his failure to guide the party to an impressive performance at the hustings, the Chief Minister said, “I accept that there must have been loopholes in my own leadership which led to the party’s dismal showing.”

Rawat thanked the Congress leadership and the party’s legal cell for the support extended to him during the polls.

The Chief Minister, who has been accusing BJP of pumping huge funds into the elections, also asked the Election Commission to determine the upper limit for election expenses of a party.

The BJP put up a splendid show in the state polls and is leading in 56 seats in the 70-member Assembly while Congress was ahead in only 10 seats.

UP Assembly polls: BJP, allies ahead in 305 seats

Lucknow: The BJP and its allies marched ahead in 305 Assembly seats in Uttar Pradesh as per trends from all the 403 seats, which showed the SP-Congress coalition leading in 68 places and BSP in only 20.

Trends available till midday showed that the saffron party and its allies Apna Dal (Soneylal Patel) and Suheldev Bhartiya Samaj Party (SBSP) were way ahead, relegating rivals SP-Congress combine and the BSP to the second and third slots.

The fledgling SP-Congress coalition was ahead in 70 seats (SP in 59 and Congress in 11), while BSP trailed far behind with leads in only 18 places.

Gayatri Prajapati, who is absconding after the UP Police booked him in an alleged gangrape case and attempt to rape a minor, was trailing in Amethi, where Garima Singh (BJP), the first wife of Congress leader Sanjay Sinh, was leading.

Imphal: The Congress and the BJP were racing neck and neck in the Manipur assembly poll, winning 12 and ten seats respectively and both leading in six constituencies each this afternoon.

As per trends and results available till 2 pm, the Naga People’s Front has won three seats and National People’s Party won two and has taken a lead in two other seats.

Sharmila, who had contested against the Chief Minister, was relegated to the fourth position, securing just 90 votes.

Sapam R Singh of BJP won from Konthoujam Assembly seat by a margin of 2772 votes and Heikham Dingo Singh won from Sekmai constituency by 2532 votes. In Kangpokpi seat, Nemcha Kipgen of the BJP won by a margin of 2297 votes.

Y Jaikumar Singh and Langpoklakpam J Singh of Nationalist People’s Party (NPP) emerged victorious from Uripok and Keishamthong seats by 345 and 3261 votes respectively. NPP is leading in 2 other seats.

Lokjanshakti party won Langthabal seat by a margin of 2331 votes.