A Love Letter to POTUS: Hate is a four letter word we need to Trump, President Donald 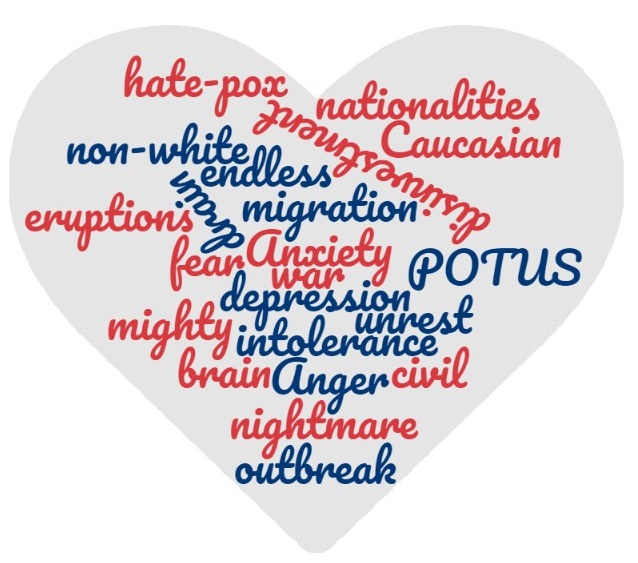 I speak to you in love and in respect although I don’t know if I will hear from you.

What happens so far away from where I live does not affect me, directly. And I am no wise man who can pontificate the mighty POTUS from my tiny, humble pedestal. Nor do I have any well entrenched political views. But I speak the voice of love (which is again a four letter word, but my scriptures tell me it’s actually quite different). In my dictionary, it encompasses selflessness and compassion, respect and fellow feeling.

And in this regard, the mighty US which has been a bastion of liberal humanitarian philosophy and mindset, does seem to worry everyone. Your ancestors fought the civil war on some noble principles or universal human values. Your country gave refuge to Jews from Europe, Indians, Chinese, Mexicans, Arabs… religions and nationalities of all hues. That made the US great.

It happened because the voice of liberalism was strong (even though the US liked to flaunt its military muscle throughout). While the military-industrial complex had its own designs, the greatness of the American people was the warmth with which they welcomed new ideas. The US nurtured all with its recipe of warmth, hope, opportunity and freedom. Today, the US has more Yoga studios than any other country in the world, actually even India. That made the US great!

And the all and sundry who came in as recipients of this American greatness eventually paid back. They contributed to making the US the hub of innovation and commercial success. They brought diverse inputs and skill sets that fostered innovation on a faster pace than the rest of the world put together. And together, at least in terms of creativity, service and research, they helped the US the most. They helped make US the greatest in so many ways. Although personally I don’t appreciate the crop of Indian Americans who don’t think much of India or don’t wish to give back anything, but let me implore you to see that they have been seriously involved in the US success story, like people from so many other nationalities. Countless scientists and innovators have put their toil, tears and sweat to bring the US to where it is now.

And today, when I hear that the current trend in the US is about killing Indians, coloreds or (non-white Caucasian) humans of other hues, I seriously worry about where, the once great country is headed. Hate has an obnoxious quality; if we have it in us then we are no different from the Al Qaeda or ISIS. And the happenings in the US are like the hate-pox showing its ugly eruptions. It’s a far more serious outbreak than any disease. You need to stamp it out before it becomes an epidemic.

If people don’t feel safe, they will move out. And although it’s too premature to say anything, my gut instinct is that if you don’t get hate under control, it is not unlikely that the liberal American intellectuals, your fabled companies, the tolerant white Americans, will start looking for other shores. And I shudder to think what will remain of your mighty nation under those circumstances. From the Great American dream, I humbly foresee an endless nightmare. And the only person who can stop this from happening is you, Mr. President.

I wish I were totally wrong. But I know I am not.

Wishing my American brethren all joy and prosperity!