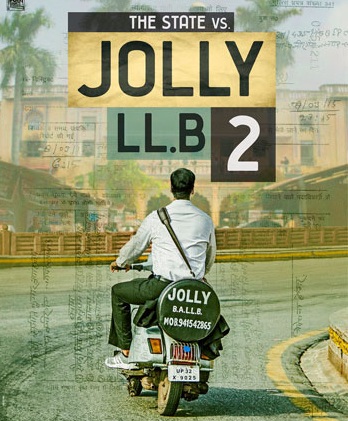 The movie has received mixed reviews from critics over the past week after its release. While Saurabh Shukla’s role peppered with punchlines has garnered a lot of praise, it seems that the film-makers were unable to utilize Akshay Kumar’s comic timing in the best possible way.

The role of a high-profile celebrity lawyer, which was showcased by Boman Irani in Jolly LLB, has been played by Annu Kapoor in this sequel.

While the movie showed collections of 50.46 crores over the weekend, figures have seen a massive dip since the week began. The Day 4, 5 and 6 collections of Jolly LLB 2 add up to just 22.22 crores which is a sharp drop of almost 56%.

Film critics have pointed out that the movie uses unnecessary song-and-dance routines unlike Jolly LLB 1 and also that it stretches on too long. This could be a possible reason for a dip in collection numbers and audience appeal after Day 3.

Going by trade figures, the movie’s cumulative collection at the box office stands at 81.85 crores as of Day 8. Analysts are saying that the Akshay Kumar-starrer is going to need a miracle if it intends to hit the 100-crore mark.

Here is the complete day by day box-office collection of Jolly LLB 2:

Set in Lucknow, Jolly LLB 2 picks on the same theme as its predecessor. Jolly (Akshay Kumar) takes on the case of a pregnant woman named Hina (Sayani Gupta) whose husband has been murdered.

The movie is a take on the condition of the judicial system in our country and shows the battle of a relatively-unknown lawyer taking on the big-shot lawyer in order to secure justice.

The same day also saw the release of Hind Ka Napak Ko Jawab starring Saint Dr. Gurmeet Rahim Rahim Insan Aka MSG whose Day 8 collection figures stand at 113.43 crores. The action movie with a social message is inspired by the Indian Army’s surgical strikes and deals with the issue of Pakistan-sponsored terrorism.

Unlike Jolly LLB 2, the collections for Hind Ka Napak Ko Jawab have been consistent across 7 days.

You can read more about its plot and collection figures here: Hind Ka Napak Ko Jawab