You can now Transfer your Railway Ticket to someone else. Here’s how: 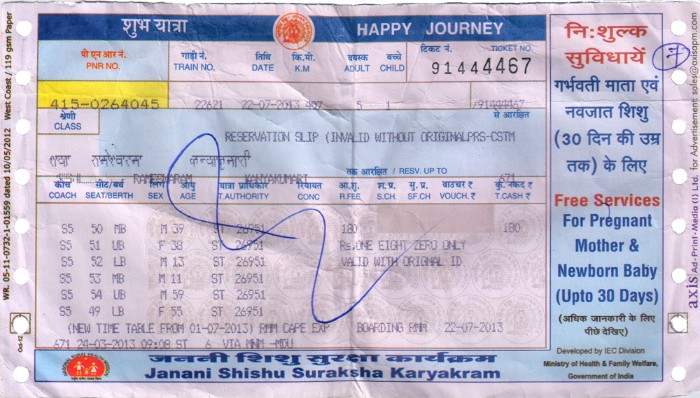 Traditionally, the biggest problem of train or air travel is that tickets are non-transferable. Which means that in case you aren’t able to travel, it is impossible to give your ticket to someone else and the money gets completely wasted. This would also result in a seat on a train going empty because it was already reserved in your name.

This is going to change very soon thanks to the new rules proposed by Indian Railways.

You will now be allowed to submit a request to change the name of the traveling passenger on a railways ticket. This will allow you to give the ticket to someone else and ensure that your money doesn’t go waste.

The change of name on tickets can be only done on confirmed tickets. To prevent misuse, the government has empowered Chief Reservation Supervisors at different train stations around India to validate these name changes.

For individuals, you will only be allowed to transfer the ticket to your immediate family members such as parents, siblings, children or spouses.

With regards to students, they will be able to transfer the ticket to any other student who is studying in the same educational institute. For this purpose, the ticket-holding student needs to produce a written request from the head of their educational institution requesting that the ticket be transferred. This written request must be produced at least 48 hours before the scheduled departure of the train.

Several people travel on trains in large groups while going for weddings. For such groups, the ticket can be transferred from one person to another provided the head of the wedding party group makes a written request in this regards.

In order to prevent large scale misuse, the railways have said that only 10% of the tickets can be transferred in cases of group travel. Therefore, in a wedding party of 50, not more than 5 people will be allowed to transfer their tickets.

How to transfer your ticket?

The process of transferring or changing the name on the ticket cannot be done by the ticket issuing clerk. Only the Chief Reservation Supervisor is empowered to authorize this.

For changing the name on a ticket, a passenger needs to visit the Station Master or the Chief Reservation Supervisor with a written application requesting the transfer of ticket.

The passenger also needs to prove that the new ticket holder is a member of their immediate family by providing documentary evidence. This can be done using authorized documents such as ration card, bank pass book etc.

Subsequent to filing this request, the concerned officer will take a decision and you will be issued with a ticket under the name of the new passenger.

This new move by the Indian Railways will benefit hundreds of customers who, earlier, would end up losing their ticket money due to last-minute changes. The safeguards included in the process by the railways will ensure that there will be no misuse of this system.