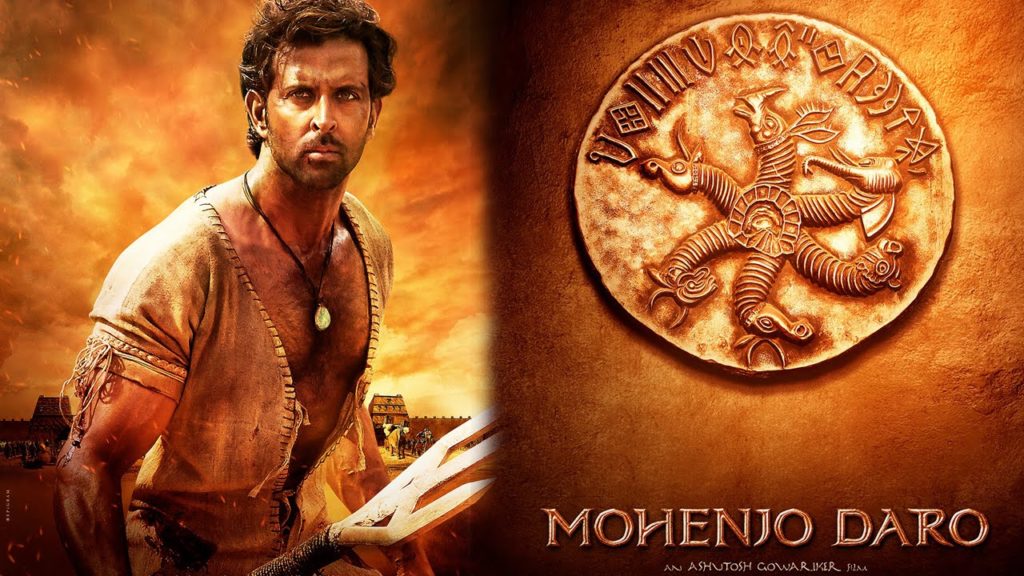 big on story and action. A must watch for the brilliant acting, and drama.

The story being set in the ancient Indus Valley Civilization, the film has been too long in the making, but the final result makes it worth the wait. The direction has been playful with the history at many places, but you can’t complaint as it looks visually spectacular on the screen with a compelling story. Sarman has been the main focus of Mohenjo Daro and the plot keeps revolving around him.

The script writing and dialogues are brilliant, rendering the movie as a delight to watch. The visuals and the fight sequences are stunning and they appear brilliant on the screen.

The story is set in 2016 BC and it revolves around glorification of Indian civilization. Sarman (Hrithik) is a simple farmer who gets mesmerized by the beauty and grandness of the city of Mohenjo Daro during his visit. But his visit to the city has a separate hidden agenda while he works there as a peasant. Princess Chaani (Pooja Hegde) falls in love with Sarman after he saves her life during a street mishap.

The city of Mohenjo Daro is shown to be very devoted to ‘Sindhu Ma’, a river goddess, and the princess is shown as the chosen one to serve the goddess. The story takes a troublesome turn as Sarman abandons his hidden agenda with focus towards wooing Princess Chaani. Sarman because of such a motive falls in conflict with the politician Maham (Kabir Bedi), who intends be the dictator of Mohenjo Daro.

Moonja (Arunoday Singh) is Maham’s son, who makes his best effort to deviate Sarman from his motive by using him as a pawn for assisting his father in enveloping the city under the one-man-rule of his father. Sarman has to defeat the evil motives of Maham and Moonja for winning over Chaani and saving the city from destruction. The focus of the story is about whether Sarman will make efforts to save city from Maham & Moonja and win over his love Chaani or destroy the city himself because of his hidden agenda.

Undoubtedly, Hrithik Roshan has delivered one of his career’s best performances. The character has been nailed head on and this character would not have suited anyone else better. He has acted well through this transformation from a small former to a lover and then to a fighter.

The debutant Pooja Hedge makes a good impact. She plays the role well with innocence and gracefulness at the same time. The pair looks great on screen but her role in the movie is limited.

The supporting cast does a good job by giving tremendous support to the story plot. Acting from a few support characters shines out.

There is not much to complain about the direction of Ashutosh Gowarikar as he is a proven genius. With very well-executed action sequences, there are numerous scenes that will leave you speechless, spellbound, and nostalgic. There is not much of VFX, which can be justified as the focus is more on the story.

The film has the display of top-notch sets and cinematography is according to the plot of the story which makes it a visual treat. The costumes appear to be unjustified as they do not suit the theme of the film while the sets are made in accordance with the theme.

A.R Rahman’s music had not made much impression on music lovers during the movie’s audio release but while watching the movie, these songs look excellent. Two out of the total 8 songs create aura on the screen – Mohenjo Mohenjo and Tu Hai. As per the plot, there is sheer brilliance in the background score for providing thrilling expereince to the audiences.

The climax has some jaw-dropping action that is enough to hook the audience to their seat. In fact, the climax stands out as the major highlight of the movie that is thrilling enough to keep you at the edge of your seat. Some more drama is added to the story with shocking revelations towards the end.

The plot of the movie has a well-researched and well-executed script and story. The action sequences appear realistic and are well-shot. Also, Hrithik stands out with one of his career’s best performance. The climax has been brilliantly shot along with alluring songs.

There have been instances of too much of cinematic liberty in the movie as time lapses here and there. VFX is okay but there was scope to make it better. The love story lacks originality and it not does justice to the setting of the movie which also has missed some points in depiction of the culture of ancient civilization.

As a complete movie package, Mohenjo Daro is all about pure entertainment.

It’s a must watch because of the brilliant direction, well-scripted story, and stunning visuals.

Share
Facebook
Twitter
Pinterest
WhatsApp
Telegram
Previous article
Rustom Review: A Courtroom Drama where Akshay Kumar steals the show!
Next article
OnePlus 3 can now be yours with 100% cashback in Exchange for your old Smartphone