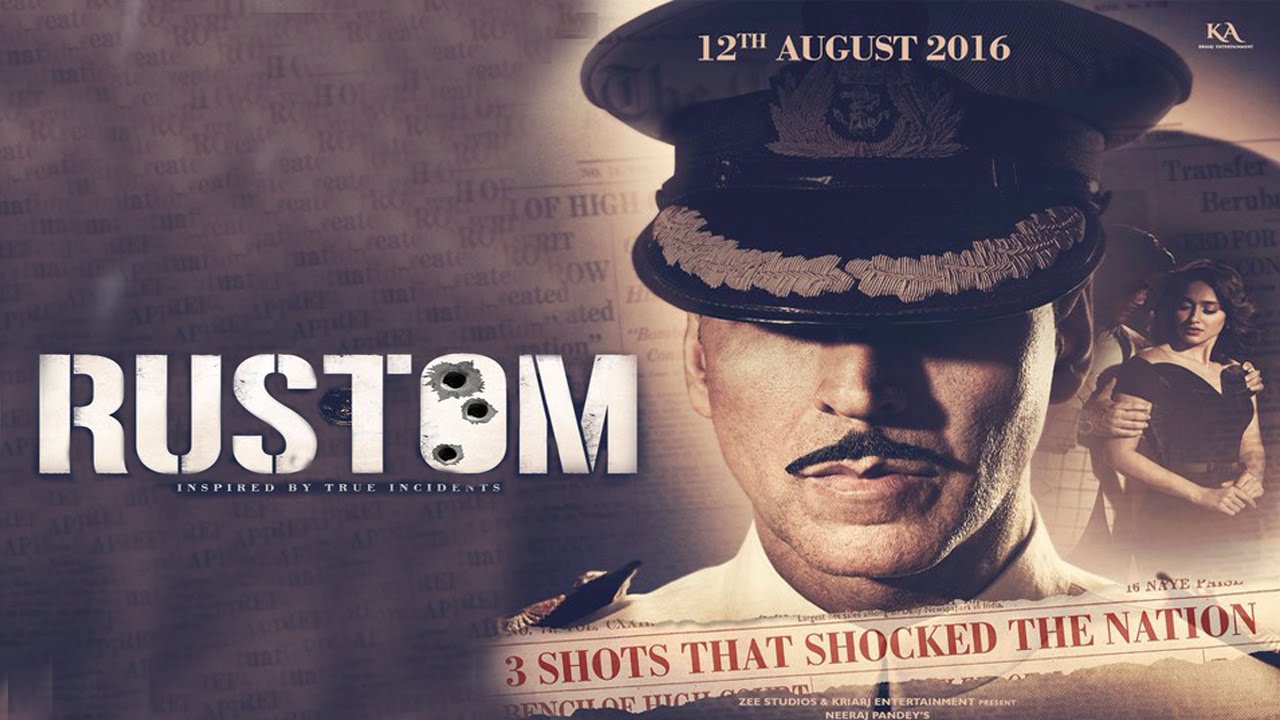 Inspired from the famous KM Nanavati case that took place in 1959, Rustom is a brilliant attempt as compared to the previous movies that were based on the same subject. This movie is about an honorable Naval officer who kills his wife’s boyfriend and pleads not guilty.

Rustom (Akshay Kumar) is madly in love with his wife Cynthia (Ileana D’Cruz), but being a naval officer, he had to go away from home for a six months trip. The tour finishes before time, and he finds out that Cynthia is having an affair with a millionaire, VikramMakhija (ArjanBajwa). Rustom doesn’t know how to control himself and in anger he kills Vikram. Right after that, he even goes to the police station and surrenders but in the court, he pleads not guilty.

Now, Akshay Kumar is the only one who knows what can turn the whole story in his favour even when it was a clear cut case. That’s the reason he fights his own case and cleverly brings out another side of it. What helps him more is the interest of local media in his honesty and tremendous support of the citizens because he is a decorated naval officer who has been cheated on by his wife.

After movies like Special 26, Baby, Holiday and Airlift, Akshay Kumar has managed to put another medal in his patriotism. This time, he has played the role of a Parsi Naval officer brilliantly with the much needed calmness and politeness in his voice throughout. Some of his dialogues are full of energy and style, which he manages to deliver very well. Ileana D’ Cruz managed to portray the role of a London return girl pretty well. However, all she did throughout the movie is cry in guilt. Arjan Bajwa, who plays Ileana’s boyfriend has performed decently as a spoiled brat but his sister, played by Esha Gupta, is the one who steals the show with her amazing portrayal of a wicked, spoiled and rich lady of the 60’s.

The ones who really kept this movie interesting with the help of acting in this whole courtroom drama is Kumud Mishra, Sachin Khedekar, Pawan Malhotra and Anang Desai, who really manage to make you laugh a lot.

Directed by Tinu Suresh Desai, this movie was flawless in terms of screenplay and story but when it came to direction, a little flaws were witnessed here and there, which could have been better.

Especially, the lousy special effects and the language of certain characters somehow spoiled the authenticity of this movie.

The music of Rustom is excellent and just what we expect in a crime thriller. There are two romantic songs Tere Sang Yaara and Tay Hai, which comes in the beginning and in the end, respectively. Apart from that, the song RustomWahi is also a little groovy and was a perfect match to demonstrate Akshay’s intellect in the courtroom.

Climax of this movie is something that people anticipated in the beginning but its execution and outcome is something you would love to see. Also, if you wish to enjoy this movie throughout, don’t read about the Nanavati case before watching it.

Why to watch this movie?

First, Akshay Kumar is brilliant in this movie and second, the story is just too intriguing. This courtroom drama is full of unexpected comedy too, which won’t let you get bored in a crime thriller.