On the collections front, MSG has also started on a very strong footing this time.

The distributor of Mumbai, Ashish Wagh, East Punjab distributor, Pankaj Khemka, Brijesh Tandon from Delhi and UP, Sanjay Marudhar from Rajasthan territory have all confirmed that houseful footfall are the norm in every MSG release and this one has upped the ante.

The most compelling concern propelling families to MSG is that it promotes family values and affection, something that interests every responsible parent. The competition Mirzya or Tootak Tootak Tootiyan, fails to weave any magic and engage families. Dhoni is doing OK put it is a longish  recap and  predictable fare. MSG is a Superhero who is an Indian answer to justice league.

MSG The Warrior Lionheart has become the first film in Bollywood ever to run its opening shows for 24 hours on a trot. The film released at 12 midnight Thursday, and has gone on in theaters non stop in several locations in North India.

On Friday, the film has done the best business out of all Friday releases raking in 18.070 Crores gross at the box office.

Independent trade websites and magazines have corroborated the excellent performance of the film and it’s extreme fan craze. 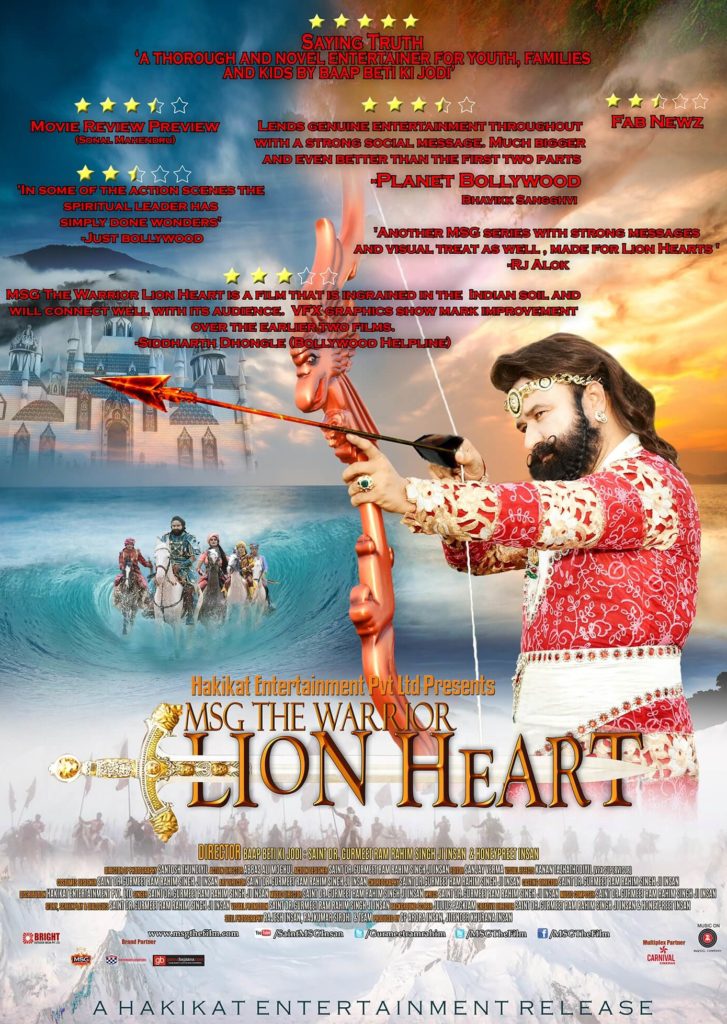 Here is what others have said:

A Thorough and Novel Entertainer for Youth, Families and Kids by BAAP BETI KI JODI

MSG: The Warrior Lion Heart – Lends genuine entertainment throughout with a strong social message. Much bigger and even better than the first two parts.

‘Another MSG series with strong messages and visual treat as well’

MSG The Warrior LionHeart is a film that is ingrained in the  Indian soil and will connect well with its audience..VFX Graphics show mark improvement over the earlier two films….

Dr Gurmeet Ram Rahim Singh Ji Insan and his daughter Honeypreet Insan try their best to weave an engaging narrative and succeed to a major extent.

In some of the action scenes the spiritual leader has simply done wonders.