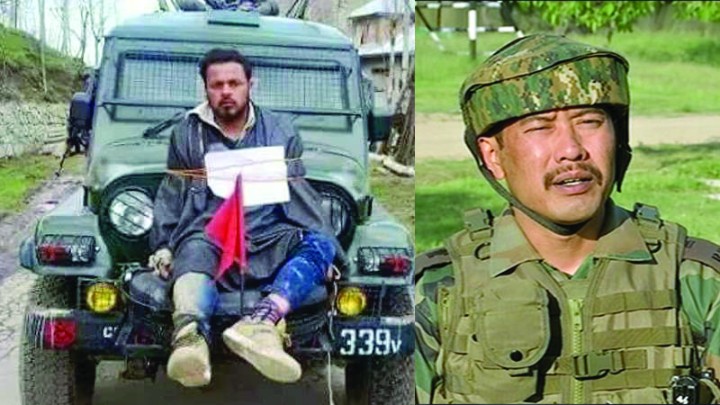 This comes a month after Major Gogoi bravely saved the lives of ITBP personnel who had been cornered by a mob in Budgam district of Jammu and Kashmir.

On April 9th, Major Nitin Gogoi was heading a Quick Response Team (QRT) of the Army and received an SOS call while patrolling. A team of ITBP personnel along with election officials had been cornered by a violent mob inside a polling booth and needed immediate assistance.

Showing a massive presence of mind, Major Gogoi had tied one of the stone pelters to an army jeep while evacuating the stranded security forces. He did this to ensure that the mob didn’t attack the vehicle and managed to end the standoff without the loss of a single life. Had Major Gogoi not reached the spot in time and done what he did, several officials would have lost their lives at the hand of a violent mob.

Instead of praising him for resolving a situation without bloodshed, several anti-national forces criticized him for his act. The truth remains that Major Gogoi handled a whole terrorist mob of stone pelters without even touching his gun.

We had written a letter earlier this week to Prime Minister Modi and several others.

In that open letter, we had appealed to the government to recognize the bravery of Major Gogoi and boost the morale of our armed forces. We are extremely happy to see that this has finally been done.

Our security forces work hard against all odds to keep India safe. It is definitely a job that entails a lot of sacrifices and hardships and our soldiers do so without any complaints. Is it not then our job to support them and their actions which are done in the interest of our country?

It is unfortunate that criticizing the Army has now become a trend in India. The Kashmir issue has long been a topic using which anti-national forces criticize the government and the armed forces while providing support to militants and separatists. This wonderful action by the army of awarding Major Gogoi sends out a strong signal that such forces will not be tolerated anymore.

The average Kashmiri who hates violence has a massive amount of love for the Indian Army and the work that they do. It is common knowledge that militants take Kashmir is hostage and use them as a shield against the Army.

Where are all these “activists” when militants use civilians as human shields and even sacrifice their lives for their own agenda of terrorism? It is extremely demoralizing for the army when anti-national forces and the media constantly question the forces while turning a blind eye to the activities of terrorists supported and funded by the NaPak government across the border.

The Kashmir issue has long been used by politicians to support their own electoral agenda and vote bank politics. In this game, the Army becomes an unnecessary victim despite the sacrifices and the tireless efforts of our brave soldiers and offers.

It is time that our government took a strong stand on Kashmir and gave the Army enough autonomy to handle this issue and take strict action against militants and terrorists. We believe that this recognition and award given to Major Gogoi’s bravery is a welcome step in the right direction.