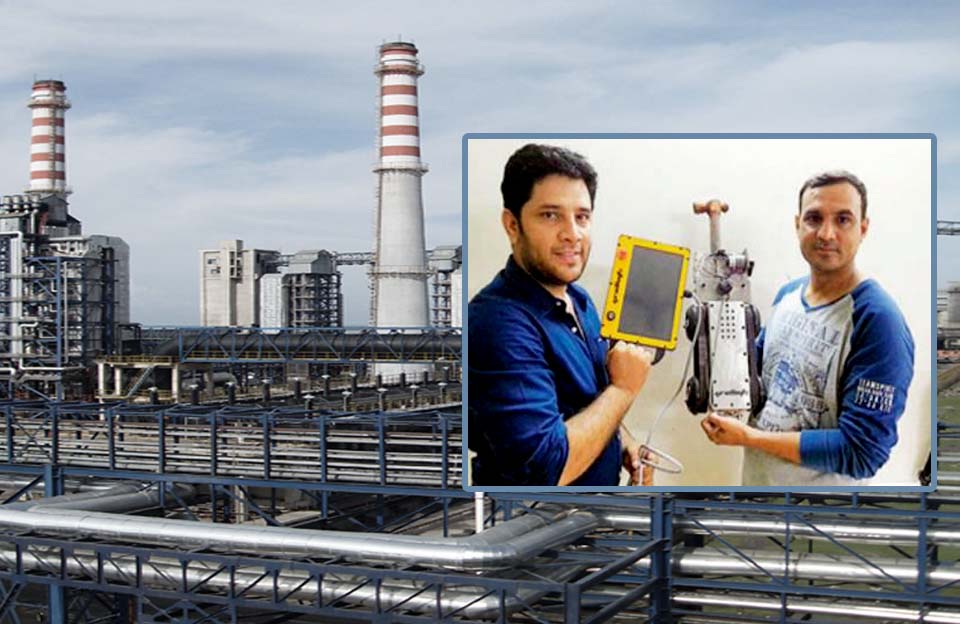 It’s a story about Ahmedabad city, where Make in India drive just got a shot in the arm due to the help of a city-based startup. This City-based startup actually helped in saving crores of rupees. At a power generation plant, a hammer fell into a high-pressure steam pipe and because of this, the power generation came to halt. For the help, the power plant called the startup to pull out the hammer using one of their robots.

The whole operation cost about Rs. 16 Lakh to the plant and this if the power plant had decided to retrieve the hammer themselves, then it would have cost about Rs. 5 Crore. Pulkit Gaur and Govind Godedara from Gridbots Technologies in Ahmedabad were called into action at the TATA Power Plant in Mudra during the last weekend.

When the hammer weighing 2kg fell in the steam pipe, the power generation completely stopped. On this, the top officials commented that “The 800 MW production unit was under maintenance when a hammer weighing around 2 kg fell into a steam pipe. The only alternative we had was to locate where the hammer stuck in the pipe, which would take around a week’s time, had we not employed the robot. Then we would have had to cut the 3-inch thick pipe, retrieve the hammer, weld the pipes, get technical clearance from our monitoring authorities and the whole process would have resulted in a loss of around Rs 5 crore.”

Plan of action: Instead of following the traditional procedures, the higher authorities of the plant called Gridbot Technologies in order to pull out the hammer, which was lodged 15 meters into the pipe. Chief Technical Officer, Pulkit Gaur, and Head of Design and Manufacturing Division, Govind Godara from Gridbot, reached the plant on early in the morning and spent the whole day in rehearsing their plan of action before reaching Mundra.

The whole operation took three hours and this time would have been seven days if the conventional procedures were followed. The personnel of Gridbot Technologies stated that “as soon as we reached there, we realized a serious modification was required in the robot’s gripper to pull out the hammer from a depth of 15 meters. What made work difficult was the 90-degree curvature of the pipeline. However, we could locate the hammer within 30 minutes of commencing the operation,” Gaur narrated. He added, “Because of the 90-degree curvature, it was difficult for the robot to retrieve the hammer without losing its grip. We applied maximum pressure to the gripper (equivalent to 250 kg) to ensure that the hammer doesn’t slip.”

The start-up Firm: Gridbots Technologies is a start-up that was incubated in IIM Ahmedabad between 2009 and 201. Pulkit Gaur, has a degree in Bachelors in Engineering from Jodhpur University and established the company with his childhood friend Govind who is a Commerce graduate from the same varsity. The duo designs several robots for industrial use.

Such startups are seriously making a good start and Make in India movement is simultaneously helping them to make a strong position in the market. The day is not far away when India will have its own ‘Microsoft’ or ‘Google’.